What the Bad Boys meant to me 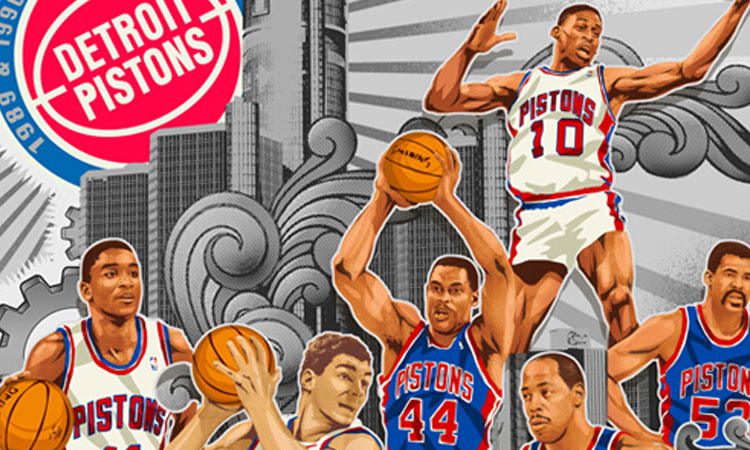 Last night, ESPN aired another installment of their award winning “30 for 30” documentary series.  This episode was especially of interest to me (and likely most of you) because it was 2 hours of interviews, video, and discussion about the Detroit Pistons during the “Bad Boy era” of the late 80s and early 90s.  The 2 hours started with a brief explanation of the city of Detroit falling on hard times and its residents moving out to the suburbs, including the Pistons franchise.  It continued with a brief mention of how the front office was put together after several lackluster seasons (and even a still photo of Dick Vitale as Pistons head coach!).  The story continued on through the back to back championships and then ended by closing on how a majority of the team ended their careers.

It reminded me of what that team meant to me…(Full disclosure: I was 9 years old when the Pistons beat the Lakers)

I didn’t know what basketball was when Isiah Thomas was drafted #2 overall from Indiana University.  I didn’t know who Joe Dumars was, or for that matter, where McNeese was or what a state even was.

My Dad was born in mid-western Ohio, in an area where you were either a Cincinnati or Detroit fan.  My Grandfather was a big time Lions and Tigers fan, and eventually became a big time NCAA basketball fan.  I was born and raised about 8 miles west of Washington DC, and up until I would say 1987, I knew about basketball and a hoop, but I can’t admit to knowing there were professional leagues like baseball and football because my Dad is/was very much a fairweather fan when it came to basketball because he didn’t really grow up with basketball being a big thing.

My Dad was a guy who worked shift work at a local print shop, often working long hours helping make ends meet for my mom and I (which would eventually be 1 of the reasons they split up, because of all the hours he worked).  My Mom and Dad split up when I was 7 years old, and while I do remember that happening I don’t remember why.  What I do remember from this time period though early on in my life is that my Dad was always home and he had 2 friends from his job (a Laker and Celtics fan) that always came over, or we went to their house, to watch all of the pivotal games…together.

It’s my first memory of bonding with my Dad over something after my parents separated, because we spent a lot of time reading about and following the Pistons.  (I mean christ… I’m 11 years old and reading “The Franchise” about the Pistons and not even knowing what a cuss word is and the book is full of them.)  All of my pictures from school during those years you’d see me wearing a Pistons shirt or sweatpants or a combination of both.  We would go to Richard or Al Jackson’s (we always say Al Jackson’s full name, because, well… he’s Al Jackson) house whenever the Pistons would play the Celtics or Lakers, and we’d go to the Capital Center to see the Pistons when they came to Landover, Maryland to play the Washington Bullets.  His company had courtside seats, and I’ve stood next to John Salley and James Edwards as a 10 year old getting pictures taken when they came to town. Looking back at clips and highlights of the Bad Boys teams, I love their physical and “blue collar” attitude toward the game.  I remember the highlights of the games as memories of watching them live.  Occasionally you’ll catch a replay of a Bad Boys era game on NBATV, but nowadays you really can only remember the games through the various highlight reel plays that ESPN wants to flash at you.

I love how GM Jack McCloskey wasn’t satisfied with merely reaching the playoffs or a certain level of the playoffs, even for a franchise that had not seen regular season success prior to his takeover of the front office, he was constantly wanting to improve the team.  Let’s not fool ourselves… the Pistons teams had a lot of talent on them.  Isiah Thomas was a #2 overall pick, Mark Aguirre was a #1 pick, Vinnie Johnson was a #7 pick, Adrian Dantley was a 2-time leading scorer in the NBA with 30+ points per night, etc etc etc… the team was put together a lot like that 2004 Pistons team was.  A core of once highly regarded players who came together and played for the betterment of each other as a group and not as individuals.  So often, this frustrated me about how Joe Dumars approached managing the personnel for the “Going to Work” Pistons teams.  Dumars seemed satisfied letting a player’s contract expire rather than using that player and his diminishing skill as an asset, and trading him for younger talent that could extend the Pistons latest run.  But… this isn’t a post meant to bash Dumars and his personnel decisions

Most importantly though for me personally… the Bad Boys spanned a critical transition period in my life (and including my Dad, our lives) where sports came along and eased the pain of a major life change like separation or divorce, by having a favorite team win or be on the verge of winning.  Finding out later about a lot of the details of what went on during those years, and more specifically the death of Joe Dumars’ father in the Portland Trailblazers series, have only cemented my love for the team

The Bad Boys turned me on to the game of basketball, and while my love for it has dissipated over the years (due to strikes, lockouts, etc), whenever I get together with my Dad for a beer or even when I see my Mom and the topic comes up, it’s a fun discussion to have and many laughs are shared.  My Mom always used to say “Danny, you should’ve been born on a basketball court in Detroit”, and while it never really made much sense to me, I guess the countless nights of me straggling back home as the street lights came on, from the park playing pickup basketball is the reason why she said that.  Afternoons of cherry picking at the 3 point line, trying to replicate Joe Dumars’ shooting motion (but as a lefty).

At the end of the 30 for 30 episode as the players were walking off the set with the caption of how they were either traded or retired, I couldn’t help but get emotional about it.  Hell… when Rick Mahorn got choked up talking about how he was picked by the Minnesota Timberwolves in the Expansion Draft after the 1989 championship season, it caused me to choke up a little bit.  All good things come to an end, and shortly after that period in the Pistons’ history, we had to endure years of the “Teal era” that vaulted the franchise deep into another dark period before the 2000s came along.  Let’s hope the Pistons can rebound again soon, so that the next generation of young, impressionable Detroit/NBA fans have a reason to cheer for the Pistons and make The Palace one of the loudest arenas in the NBA once again.