Joe Dumars steps down as President of Basketball Ops 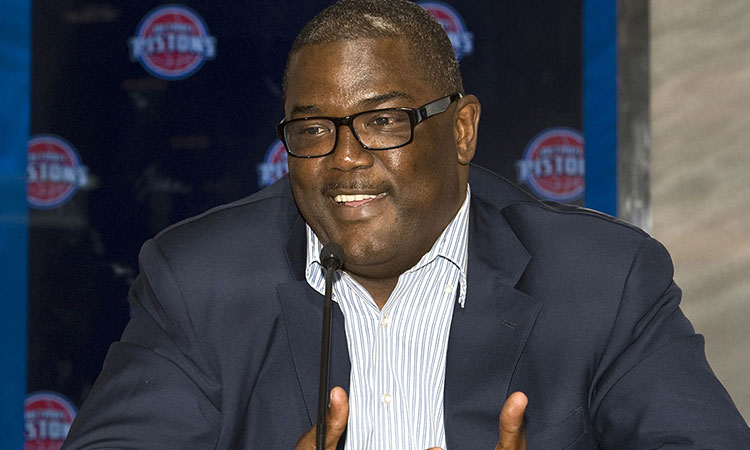 For the first time since the 2000-2001 season, the Detroit Pistons will head into their season under new leadership as President of Basketball Operations Joe Dumars has stepped down after another disappointing season for the Pistons.

The Hall of Famer Dumars helped assemble the ever popular “Going to Work” Pistons team that made it to the NBA’s Eastern Conference Finals for six (6) straight seasons from 2003 – 2008.  Lauded for his ability to put together a ‘team’ that could play well enough together that they could overcome any odds against them in the form of single or double superstar teams, Dumars’ tenure has come to a crashing end from a beginning that lead him to winning the 2002 – 2003 Executive of the Year.  Years of “staying the course” on the championship Pistons teams caused the team to gradually age itself out of competitiveness and it’s mettle being tested after the departure of Ben Wallace to the Chicago Bulls, the disastrous trade of Chauncey Billups to the Nuggets for fading star Allen Iverson, the signings of Ben Gordon and Charlie Villanueva, Richard Hamilton and Tayshaun Prince’s contract extensions, trade of Ben Gordon for a protected #1 pick and then use of Gordon/Hamilton and Prince cap space to sign PF Josh Smith and sign and trade for Brandon Jennings.

Dumars’ failing can easily be identified in player scouting (years of late 1st round picks that fell flat), and his poor use of cap space in an era when so many teams were dumping quality players in order to acquire/sign stars like LeBron James or Carmelo Anthony in a league that has slowly changed itself into a star driven league, moreso than a team oriented league.

Dumars will be best remembered for his drafting of Darko Milicic over future All Stars Dwyane Wade, Chris Bosh, and Carmelo Anthony after winning the right to pick #2 in the 2003 NBA Draft after acquiring the pick by trading Otis Thorpe to the Grizzlies for the First Round pick that by the time the 2003 Draft came around was only protected against being #1 overall.  Most NBA fanboys will fill up a comments section of any blog post about Joe Dumars with throwaway comments about how ‘Darko sucks!!11’ or ‘Doomers is the worst’, often forgetting that Milicic was part of the future after Ben Wallace or Rasheed were to re-sign and be too expensive to keep the championship team together.

In recent years Dumars and the front office has improved in the scouting of younger players as they’ve succeeded in drafting 2 quality frontcourt players in Greg Monroe and Andre Drummond.  Even though both players came highly rated out of High School and College, the naysayers still hammered Dumars for not taking guys who were more statistically inclined to make the transition from preps to pros.

Over time, the league has seemed to pass Dumars and most GMs by.  With the inclusion of statistical analysis along with game tape and other old school ways to gain on opinion on talent, Dumars fought it by saying ‘talent wins out’.  With new owner Tom Gores preaching “playoffs or bust” coming into the season, anything less than a strong showing in a weak Eastern Conference would spell doom for Dumars, and today the gauntlet has been laid down.

Dumars will remain with the team as an advisor, and Assistant General Manager George David and Director of Basketball Operations Ken Catanella step in to lead the Front Office through the NBA Draft and free agency period.  Exciting times are ahead for the Pistons, for sure.