Joe Durmars picked up the big man he wanted.  According to Yahoo’s Adrian Wojnarowski Detroit reached and agreement with Josh Harrellson.

“Harrelson will hold a partial salary guarantee for the 2013-14 season, and the Pistons will hold the team option for the 2014-15 season, a source said.”

The 6-10 Harrellson  was the 45th overall pick out of Kentucky in the 2011 NBA Draft.  spent his entire rookie season  with the Knicks averaging 4.4 point in 14 minutes of play.

In July of 2012 he was traded to the Rockets and then waived in August of 2012. He signed with the Miami Heat in January of 2013 then waived again.

In the short time he was not in the NBA he played in Puerto Rico and China.

It has not been officially announced just yet, but it likely will be today. 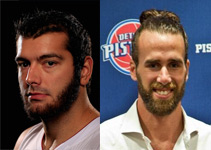 This isn’t a head turning deal, but he should be a serviceable big man to back up Andre and Moose. I’m just wondering if he brings the lumber jack bearded look to Detroit, because I’m not sure Gigi wants any competition in the facial hair department.