It’s bad enough that I can’t spell Viacheslav “Slava” Kravtsov without looking at his Wikipedia page, but I hope I don’t have to contend with the new rumor in Pistons land.  It seem as though the new rumor is that Detroit is looking at overseas champion Zeljko Obradovic for the Pistons vacant head coach position.

Look I have no clue who he is other than this ridiculously awesome and expressive picture of him. 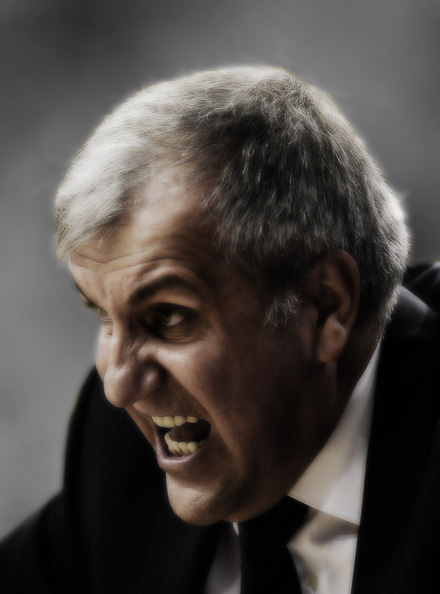 Let’s take a look at his Wiki page, which is all I can really tell you about him since he hasn’t coached an NBA game in his career.

Obradović’s greatness as a basketball head coach is fully confirmed by the great collection of titles he has acquired in his seventeen-year career as a coach: a record eight pro sports club European Champions Cups (with four different teams), two Saporta Cups, numerous domestic league championships and cups, the silver medal at the 1996 Olympics Basketball Tournament, the gold medal at the 1997 FIBA European Championship, the gold medal at the 1998 FIBA World Championship, and the bronze medal at the 1999 FIBA European Championship while coaching the FR Yugoslavian national basketball team, where he was the head coach from 1996–00. He was also the head coach of the Serbia and Montenegro national basketball team in 2004–05.[1]
He was the head coach of Panathinaikos Athens from 1999 to 2012, leading the team to become the top club in European club basketball during that time, while simultaneously maintaining the club at the top position in the Greek national championship. In total, Obradović won 11 Greek Championships, 7 Greek Cups and 5 Euroleague titles (2000, 2002, 2007, 2009 and 2011) with the “Greens”. In 2007, he achieved winning the highly coveted Triple Crown championship for the second time as a head coach (the first was in 1992 with Partizan) and won the Euroleague Coach of the Year award. Also in 2009, he managed for third time this achievement in Berlin as a head coach. In 2011 he won his 8th Euroleague trophy with Panathinaikos. His list of titles is unmatched by any other current European coach.

Cool…so he’s won a #@$% load of European Championships, does that mean Detroit is better off with him than they were with L Frank? I’m guessing that the list of top sports betting sites aren’t putting Zeljko Obradovic at the top of the list of candidates for the Pistons new head coach position.

At this point is it really about the coach?

Do we really want another to give another coach the head coach position that’s never been one in the NBA yet?

This team clearly has issues.