The Grizzlies Top The Pistons

Nat asked me to fill in because she couldn’t watch the game live.  I told her sure no problem.  But I told her if we lose, it will be short. I told her that’s it for me.  There are no more moral victories for me, I’m not gonna cheer a loss ever again.  I’m not gonna say “But Drummond played great.”  We know Drummond is great.  We all want Drummond to play more minutes.  Well, everyone except for Frank who is still rationing him.  We know this is a team that can compete.  So that’s it for taking little positives out of a loss.  No more.  It’s winning time or nothing from now on.  I won’t be satisfied with less.

I’m not going to the stats to explain this game.  If you just look at the stat sheet Brandon Knight was worse than awful.  So many turnovers in the first half alone, shooting awful, not making assists.  This poor play is more about Grizzlies defensive aggression than Brandon getting schooled.  Brandon is a lot better player this year, there’s no doubt of it now.  I think what is really different about Brandon Knight this year from last year is that he had a boy’s body.  He’s grown into his frame, and this year he’s making some grown up moves. Of course, Knight’s improved play this year is also why Stuckey had to go to the bench.  With Knight playing better it means Stuckey has the ball in his hands less.  Stuck just needs the ball in his hands.  He’s no Rip Hamilton cutting getting open and draining deuces.  Stuck needs to mow down the other team like a halfback.  Or at least that’s the theory.

A good thing about being some guy writing this game summary instead of a famous blogger is that it’s not a big deal for me to change my mind.  Jereb-Who?  Don’t miss him.  Did I used to cheer for his effort and amazing hustle?  He’s just not that good this year.  This year I find I like Charlie.  Did I ever say that Charlie V belonged in a clown car?  I don’t remember saying that.  Charlie can stretch the floor.  Charlie was able to knock it down from the three this game.  And he has even been playing defense a little bit this year. And about Stuckey.  Did I ever say I liked Stuckey or that he was a cheap man’s Wade?  I think what I meant is that he’s a decent energy guy off the bench.  But he has no vision can’t see where to pass, especially against this Grizzlies team who collapse on you with great help defense. 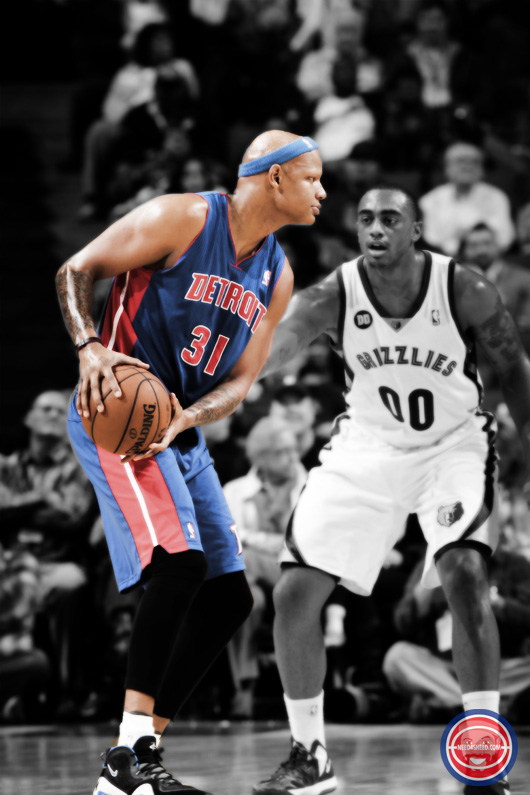 One thing about away games.  I love just listening to them.  Unlike the echo-ing tomb called the Palace, in other arenas, you hear the audience clapping, low applause for a good move, sometimes they cheer loud and yell for a dunk, and sometimes it’s a big “Boooo” as they protest a call.  Detroit needs that crowd to come back.  And we have to win to do it.  There’s no other way to bring back the crowd.  You and me and the rest of the need4sheed-ers, we are die hard fans.  The casual fans aren’t coming on the bandwagon until they see a bunch of W’s.

You know according to Hollinger, before this game, the Grizzlies were ranked the best team in the NBA.  And the Pistons  number 19.  We have to be one of the best 5-12 teams out there.  But like I said.  No more moral victories.

I could say more nice things like Charlie is finally defending and how after years he is finally earning some of his ridiculous paycheck, or how excellent Drummond is, getting better every game.   Or I can look at what beat us.  Mike Conley is a real point guard, he’s where Knight is going to be in just another month.  Or that Moose just couldn’t handle Marc Gasol on the defense or the offense because there is nobody in the NBA playing better than Marc right now.  Marc just went with the Hi-Lo and if the Pistons fronted, a quick pass meant an easy bucket.  Gasol also backed Moose all the way under the bucket in the first half for one shot with no help at all.  Just pushed him around.  Or that the Grizzlies as a team played constant aggressive defense.  I think Frank must have drooled to see how this Grizzlies team played.  He was thinking “I want some of that.”  I suppose you can point at the turnovers for how this game played out, but that doesn’t really tell the story because this Grizzlies team forces those turnovers.

No more moral victories.  As Moose would say “Get in there!”  I’m not looking back at this game.  I suppose I could say it was close the whole way with the Pistons less than 10 points away with 7 or so minutes to go, still down by less than 10 points with about 2 minutes to go, I mean sure it was close, or I could say that we “competed” whatever that means.  But, I’m looking forward.  All I want are W’s.  I know I said if we lost I would just type one or  two sentences, but I can’t help myself, I love this year’s team.  After so much gloom, we can see the light.  And now I won’t be happy after the game with anything but a W no matter who we are playing.  Watch out Dallas.