David Stern is RUNNING Things, though it feels like he’s ruining them.

You all know by now that the Pistons will be picking ninth in this year’s NBA Draft Lottery.  I’m sure we’ll see a ton of projected picks and mock drafts, but honestly we really don’t know what’s going to happen until  Draft Night.

Now my next rant has nothing to do with the Pistons picking ninth.

For years I’ve always said that the Draft had to be fixed…heck we know now that plenty of the games have been.  Just ask Tim Donaghy or Rajon Rondo, who got CLUBBED Wednesday night in overtime against the Heat. The Heat come from behind on 47 free throw attempts to the Celtics 29 and a swallowed whistle when it counted.  Heck LeBron had 27 free throw attempts himself, just two shy of the entire Celtics team.

So when the NBA Draft “Lottery” unfolded last night I could see the writing on the wall as soon as Cleveland dropped.  I said to  my friends sitting next to me, “they’re giving the Hornets the number one pick.”

And then it happened.

“Here potential NBA team Owners, buy the New Orleans Hornets, they just got the number one pick in the lottery and Anthony Davis will look great in Teal!”

How obvious was that?

How are we supposed to take this League seriously anymore?

It’s not just me, if you were on Twitter when this all went down you’d know.

David Stern…It’s his world and we’re all living in it. 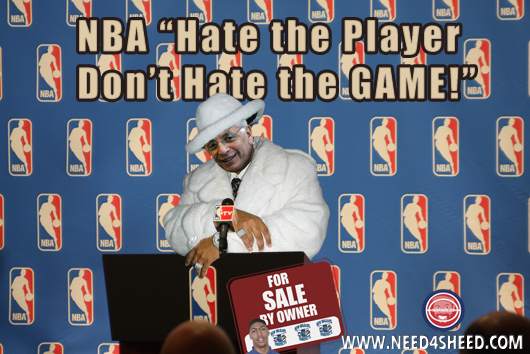 Don’t Get Pimp Slapped by The Stern

The only thing Pistons fans can do is hope the Draft pick will add value to the team and that Dumars makes some deals to get this franchise back to where they should be.