A Stucktacular shot with .2 seconds for the WIN

If you were like me and you watched the Pistons/Wizards game from the tip it was pretty clear that this was a battle for lottery balls. I’m not going to say these teams are bad, but what I am going to say is if you got past three quarters of this game you should get a medal.

That medal (if you’re a Pistons fan) came with .2 seconds left on the clock when Rodney Stuckey’s step back jumper cut the net to break the 77-77 tie and give the Pistons the win. 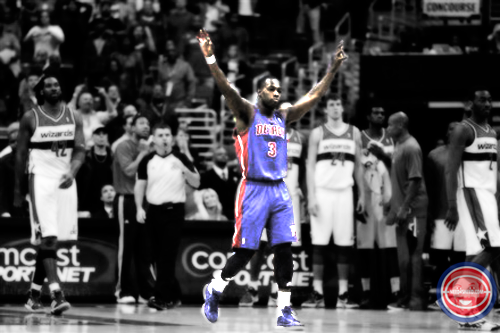 Lawrence Frank “Brandon’s hustle play was a momentum changing play. Guy took a shower during the game, and that doesn’t happen a lot. I thought that really pumped our guys up.”

Ben Gordon and 0-4 in six minutes. It’s sad that you can count on just one thing when it comes to the 12 million dollar man. INCONSISTENCY