Is there a NBA Season in Sight?

It’s been more than slow this summer when it comes to basketball news.  We have no real clue when the NBA and the Players will or if the players decide to put their differences aside and agree on some sort of new CBA so we can get back to dribbling and dunking this year.

The sides met Wednesday,  for a six hour collective bargaining session with reps from the players’ union. 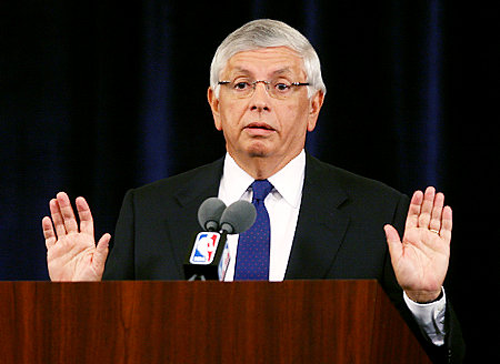 “We’re not going to get a deal done unless we spend time together and that’s progress unto itself given how infrequently we have met since the lockout began,” deputy commissioner Silver said. “It’s difficult to characterize the meeting other than there is no question both sides want to avoid missing games, or missing training camp for that matter. Everyone was very engaged today. We discussed virtually everything that was on the table. And there was an agreement that we need to continue meeting and pick up the pace.”

Thankfully they did decide on one thing.

“The p.r. war has to stop. From Stern insinuating that the players were not well-informed on the issues, to one side tossing out facts and figures the other side quickly disputes, to discussing the optimism or pessimism of getting a deal done in time to salvage a season on an almost daily basis, the rhetoric has spun out of control. Even Stern’s salary (is it $23 million? $15 million? $9 million?) and vacation schedule had become fodder for players on Twitter.

The days of negotiating through the media are over, declared Stern, Silver and Fisher. Fine. But on several occasions, three of the most influential men involved in the negotiations were given opportunities to portray Wednesday’s meeting in a positive light, to offer millions of fans the slightest glimmer of hope.

Each time, they passed.

Even with Stern, Silver and Fisher primarily using vague statements and speaking in clichés, it didn’t take a genius to realize the league and the union are still nowhere. Consider: Fisher was asked whether the union’s position on the economic issues had changed significantly.” Via Chris Mannix SI

I don’t know if you can call this progress since this is the first time the two sides have met since Isiah Thomas was in good standings with the city of NYC.

“From this day forward we’re going to make a greater effort to put the time in to get this deal done. There won’t be any other discussion of how, why, when, where. No one else’s is going to know. We’re going to get the work done.”

As for the Pistons…
They have a new coach that can’t do much other than make PR Appearances. Their 2nd round draft pick is playing in Europe. Rip Hamilton is still trade bait, and we still really don’t know exactly what roster will be in red, blue and white whenever the next NBA Season will kick off.

What have you been doing to help the lull in NBA news or action? Me…I’m getting buy on watch Classic NBA games on NBA TV and spending way too much time on YouTube.