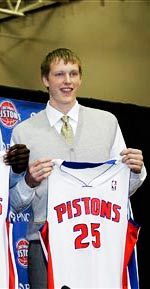 Pistons lose their draft pick Kyle Singler for (hopefully) the time being:

Singler’s deal with Alicante contains an out clause that will allow him to return to the NBA if the league-imposed lockout ends, said Singler’s agent, Greg Lawrence.

The Pistons chose Singler in the second round of the June draft with the 33rd overall pick. A 6-foot-8 small forward, Singler had a successful four-year career at Duke, where he averaged 16.2 points and 6.9 rebounds, and set the school record for most starts with 147. He was the 2010 Final Four’s Most Outstanding Player after helping lead the Blue Devils to the national championship.” Via Yahoo Sports

This Lockout it killing me, but it may be good for Singler to get some time on the floor. Good thing I didn’t toon him yet.