Lawrence Frank may be the new head coach of the Pistons

According to Yahoo! Sports’ Adrian Wojnarowski, Lawrence Frank will receive a formal offer to become the Detroit Pistons next Head Coach within the next 24-36 hours.

Better yet, just stay here and do reading at the tweet: 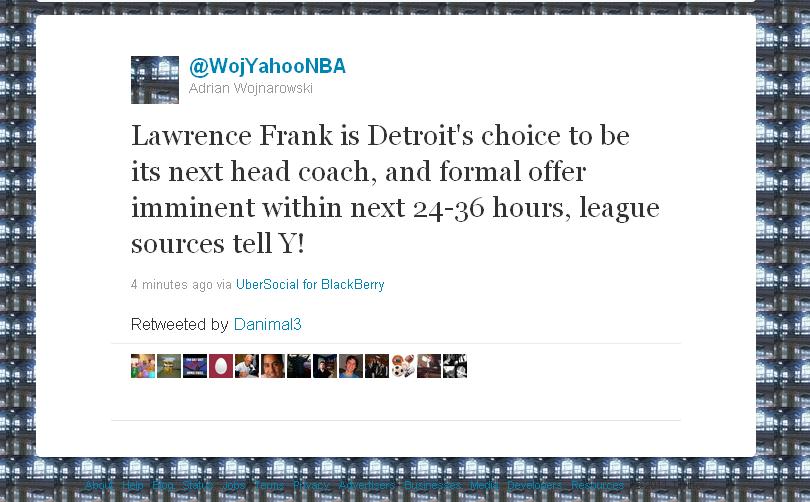 Interesting. I’ve been on Team Frank all along so…. I’ll take it.

Your thoughts? as always, more on this as it develops.

Frank, an assistant with the Boston Celtics, separated his candidacy in his first meetings with management and ownership, distancing himself from contenders Mike Woodson and Kelvin Sampson, sources said.

The Pistons organization has been deliberate in the process, talking to several candidates. But barring unforeseen snags in contract talks, Frank figures to replace John Kuester, who was fired as coach on June 5.

MORE thoughts on this (6:00pm):
Terry Foster from 97.1 “The Ticket” claims to have spoken to a player who has said he’s “not impressed by Lawrence Frank” and that he’ll “have to win them over”. Go read it for yourself here at his Twitter

N4S favorite Matt Dery, who is also from 97.1 “The Ticket” and is the host of the Pistons Postgame show says “I was a Sampson fan from the start of the #Pistons search, but I like L Frank he’s a dynamic guy and fun to talk to” – go read this tweet here

I hope Gores finds out which Piston player said he’s not impressed by Frank and makes an example out of him. Frank doesn’t have to “win” any of the players over, in fact, it should be the players who have to win Frank and Gores over with their play otherwise they’re done in the Pistons red blue and white.