John Kuester is officially out as Head Coach of the Detroit Pistons.  Kuester’s final record totals as Coach of the Pistons is 57 wins to go with 107 losses. 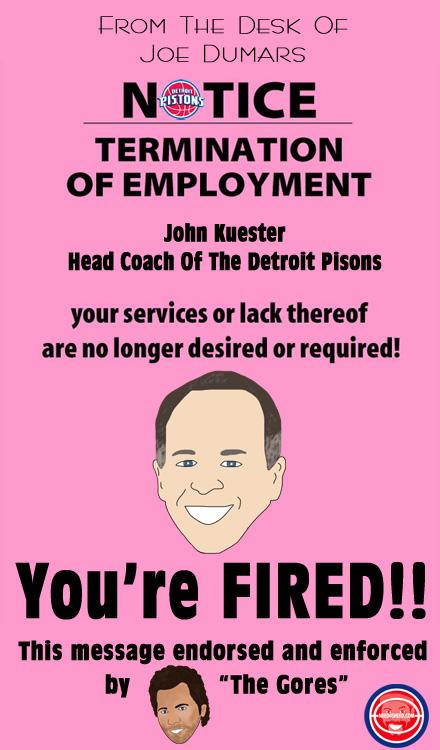 I’ve already said a lot about the man in this post right here, so go and do reading at that after reading this.

So let the speculation begin as to who the next Pistons coach will be.  I’ll give a sneak preview of the 2nd half of the Wieme/Sitto/Bohnlein podcast, I said former Kuester assistant Brian Hill deserves a shot.  Hill, who has coached at both the highs and lows of the NBA, first as coach of the expansion Vancouver Grizzlies, and then as coach of the Orlando Magic during the height of Shaq and Penny which included a NBA Finals run.

Hill is more qualified than any current coach that is rumored to either be interested in coaching the Pistons, or who is rumored to be a front runner for the job.

I’ll never understand the fascination with wanting to bring Bill Laimbeer in or with Mike Woodson.  Laimbeer has 0 head coaching experience in the league (we just got done with similar) and Woodson is a Larry Brown disciple (we just got done with similar).  It’s my opinion that this team needs to get away from the past, and move forward in a new direction.  I know I may be in the minority, but with as unsettled as the roster is and with the uncertain future of the front office staff (mainly Dumars), I think the team would be better off with someone who has been in the role of “teacher” before like Hill rather than putting a band aid on a gunshot wound with either Laimbeer or Woodson.

Now, Hill is 65 years old and does not have that many years left in the league.  Heck, he may be tired of the run around of the NBA after the drama from last season and he may have no interest in coming back.

This doesn’t mean I don’t necessarily think Laimbeer or Woodson would be good coaches at some point.  If the team was pushing playoff contention at this moment, I’d want Woodson to be hired.  If the team were up and coming, I’d say give Laimbeer a shot, he could inject some fire into a team.  With the current roster, the new ownership group – I’d say if you’re going to give Dumars 1-2 years to re-build, you push for a guy like Hill who will give you 1-2 years and re-evaluate and see who is available at that point in time.