A Changing of The Guard, Platinum style

A clear sunny day in the Metropolitan Detroit area served as a perfect setting for the changing of the guard, at The Palace of Auburn Hills.

The Palace floor, setting for 3 Pistons championship seasons, was transformed into a stage awaiting the man that will be taking control of the beloved Detroit franchise.

All of the Pistons media and key figures in the Pistons’ Organization were there. Charlie V, Ben Gordon and Rodney Stuckey were the only current players in attendance. George Blaha, Special K, Mason, Mark Champion, and your favorite radio and TV personalities were there as well.  Rick Mahorn and James Edwards were in the house talking it up and Joe Dumars was sitting right up front with Alan Ostfield at his side.

A video montage of Pistons highlights, old and new, played while Platinum Equity partners and old acquaintances of Mr. Gores from his days in Michigan mixed in giving us a glimpse into the man along with the glory days of the franchise.

Before Gores spoke we got a chance to hear from Karen and Ethan Davidson, who both touched on Mr. Gores, and how emotional of a day it was for them. The bittersweet sentiment from Ethan would have made any fan of his father sad, as he remembered the past, he also thanked Mr. Gores for letting them be a small part of the future. 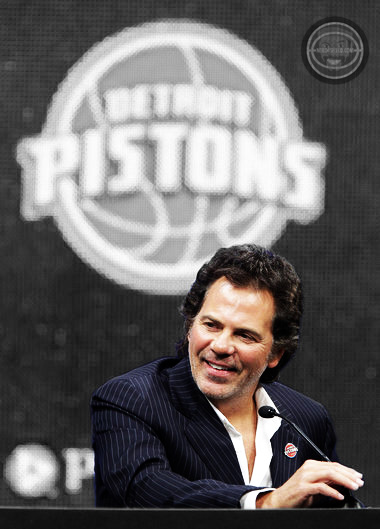 Tom then came out, introduced by Mark Barnhill of Platinum Equity, while two key figures of the new Palace regime Philip Norment and Bob Wentworth sat at the table waiting for the Q&A.

He began by thanking the Davidson family, and then started talking about how he plans to run the organization:

“I need to deliver on the standards of your passion. This is a very passionate city, and it can be demanding. I think it can bring out the best in all of us. I promise I will lose sleep to deliver to the standards.”

“It’s my job to bring Championship #4 to Detroit.”

I can’t do the whole thing justice, but you can watch the presser in it’s entirety below.  And yes…I did get a few questions in.
[flashvideo file=http://nba.cdn.turner.com/nba/big/teams/pistons/2011/06/02/TGPressConferencem4v-1723834.flv /]
Video Via Pistons.com

Now what you take from the press conference may be different from what I took away from it. I can tell you I especially loved the question Stoney asked…

Brilliant, and he really did answer it honestly…I think.

Now we can sit here and worry that he sounded too corporate, but honestly it’s what I expected from him. We are talking about a man who has come from nothing, and made billions of dollars before he’s even hit fifty years old. If the Pistons didn’t have the Palace Sports and Entertainment package attached to it, we wouldn’t even be talking about Mr. Gores right now. That I truly believe.

So he lives in LA now,  and you know he admitted to me that “I’m not a Lakers fan…anymore”.  He’s got two right hand men from Boston who will probably be more visible to the public when it comes to the team, than he is down the line. He said some of the things that the City of Detroit wanted to hear and some things that an investor in Platinum Equity wants to hear, and that’s ok.

He’s going to lean on Joe Dumars as his “basketball guy”, and push him to make the right decisions.  Gores spoke of how successful business make mistakes, and how “that’s ok” but he expects quick turnaround on the mistakes.

As for Kuester, yes he pronounced his name wrong, but I don’t think that matters. He didn’t say the words, but you can bet Q’s days are numbered.

This is new territory for him, and you can definitely tell.  If you don’t give this man a chance, then you’re very close minded. We have no idea how this thing is going to unfold just yet, so lets learn with Gores and Platinum.

I’ll tell you he’s quite a presence, he can win you over with his smile and a handshake. And he honestly looked like a kid in a candy store once he was off the podium.