It was an emotional night at the Palace with a bulk of the Bad Boys on hand the Pistons honored Dennis Rodman by retiring his jersey and hanging it in the rafters of the Palace.

If you didn’t have the honor of following Dennis’s career you probably don’t realize what kind of person he really is.  The hair, tattoos and the stunts don’t even scratch the surface of the emotion, heart and will that Dennis had. Rodman left his mark on this franchise and not only will his jersey hang in the rafters of the Palace forever, the’s going to deservedly be inducted into the Basketball Hall of fame this year.

The Palace was electric and trust me when I tell you there wasn’t a dry eye (including my own) in the house when Dennis held up the t-shirt with a picture of Chuck Daly and Mr. Davidson that said Thank You Detroit on the back. 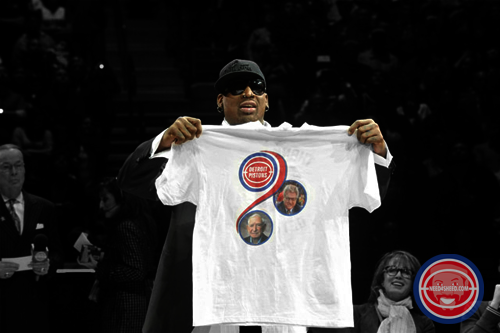 [flashvideo file=https://need4sheed.com/videos/flash_video/rodman_ceremony.f4v /]
Video courtesy of the NBA and the Detroit Pistons

Be patient, this is a long video (about 30 min) and it may take a while to load.

Class act Dennis, no matter what you think you deserve all of this. We thank you!