In a game that featured little defense – the Pistons were able to use a hot shooting 1st quarter to propel them to victory over the Washington Wizards at The Palace, 113-102.  7 Pistons players scored in double digits as the Pistons lead for the entire game.  While it was a fun game to watch for the high scoring, it’s definitely not the kind of basketball the old school Piston fans are used to seeing (or enjoying).

Super-rookie John Wall scored 24 points (including 12-13 from the free throw line) to go along with 7 assists and 5 rebounds (with 4 turnovers).  Slam dunk contest finalist JaVale McGee finished with 12 points and 2 rebounds, after scoring 20 points and having 16 rebounds in the last matchup in November.

Let’s look at the highlights, shall we?: 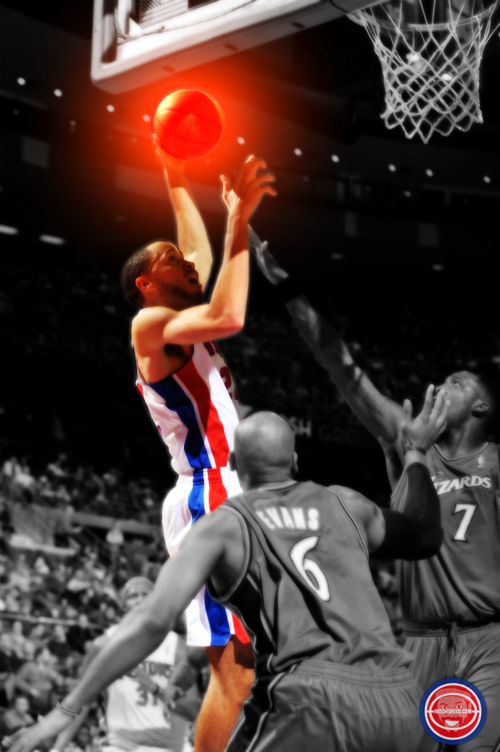 [flashvideo file=https://need4sheed.com/videos/flash_video/march_6_11_tay.f4v /]
Video courtesy of the NBA and the Detroit Pistons

Need4Sheed’s thoughts and prayers go out to former Pistons coach Flip Saunders and his family on the loss of Saunders’ mother.  We may talk bad about Saunders occasionally, but he is a good man and helped this team win many games.  Saunders was not with the team tonight – he was in Cleveland with his family.

The Pistons now must pack their bags and head out for a 3 game road trip to face off against the San Antonio Spurs, Oklahoma City Thunder and Denver Nuggets.  It’s not going to be an easy trip, but the Pistons got off on the right start with a win tonight.