If you don’t know by now, yours truly attended the Pistons first ever Social Media Night. And as I do, I’m going wrap it up for you in my own SWEDEtastic way.

The night was set up for fans, with special access for Detroit area bloggers. Fans had a chance to buy tickets for the game get a pretty sweet social media t-shirt, with passes to a meet and greet with his Swedeness, Jonas Jerebko. Bloggers got to cover the events with a special Q and A with Charlie Villanueva after the (now devastating) game against the Bobcats.

I checked in and went to the Chairman’s Club where Jonas would be shortly for the meet and greet with fans. Since I was the first one to walk in, I sat in the first row tweeting away while fans 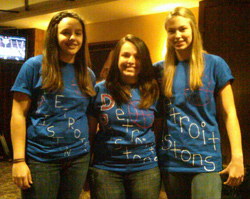 poured in to see their favorite Swede. I must have scared people off, because nobody took the 4 seats next to me until three girls walked up to me and asked me if I was saving the seats for anyone. The three then sat down beside me in their handmade Jonas Jerebko t-shirts and I listened to their angst about how nervous they were to meet him.

Minutes later Pistons.com reporter Heather Zara walked in with camera in tow to cover the event. She immediately walked over to the girls next to me with the Swedetastic shirts and talked to them. Too shy to say much Heather asked who the vocal one of the bunch was so she could interview them. They immediately told her that they learned how to say “I Love You” in Swedish for Jonas.

Heather then located the bloggers  in the room. She walked up to me and I introduced myself, “Ah my twitter friend! Nice to finally meet you Natalie.” And yes, for those of you wondering, she is that pretty in person. She grabbed me for an interview, which you can see a clip of in this video on Social Media Night from Pistons.com.

After I took my seat it was just about time for Jonas to come in. As the girls sitting next to me anxiously awaited, I made sure my Flip Video camera was ready.

Jonas walked in with a big smile that never seemed to go away. He greeted every fan as if they were his long lost friend and loved the girls t-shirts and the fact the they learned how to say I love you in Swedish. After the three girls got finished meeting Jonas, one of them walked back to her seat and said…”I think I’m going to throw up.” And I really don’t think she was exaggerating, she looked purple.

I’m guessing quite a few people have a new Facebook profile picture with Jonas right now.

I sat as I watched everyone go through the line, and when they were done I saw that Heather was talking to Jonas.  She then pointed to me and said Need4Swede. Jonas looked at me and said “That’s you?” Surprised that he knew Need4Swede, I grabbed the one thing I brought with me besides my Flip and my Blakberry and that was a Need4Swede t-shirt.

I threw the shirt to Heather and she handed it to Jonas. He opened it up with a big smile and then was getting ready to sign it. I stood up and stopped him, “that’s for you Jonas,” I said. “Cool!” He held it up and said, “I’m not sure if it will fit (it was an XL), but I’m going to rock this.”

We talked for a moment, then the camera’s had us pose with the shirt. 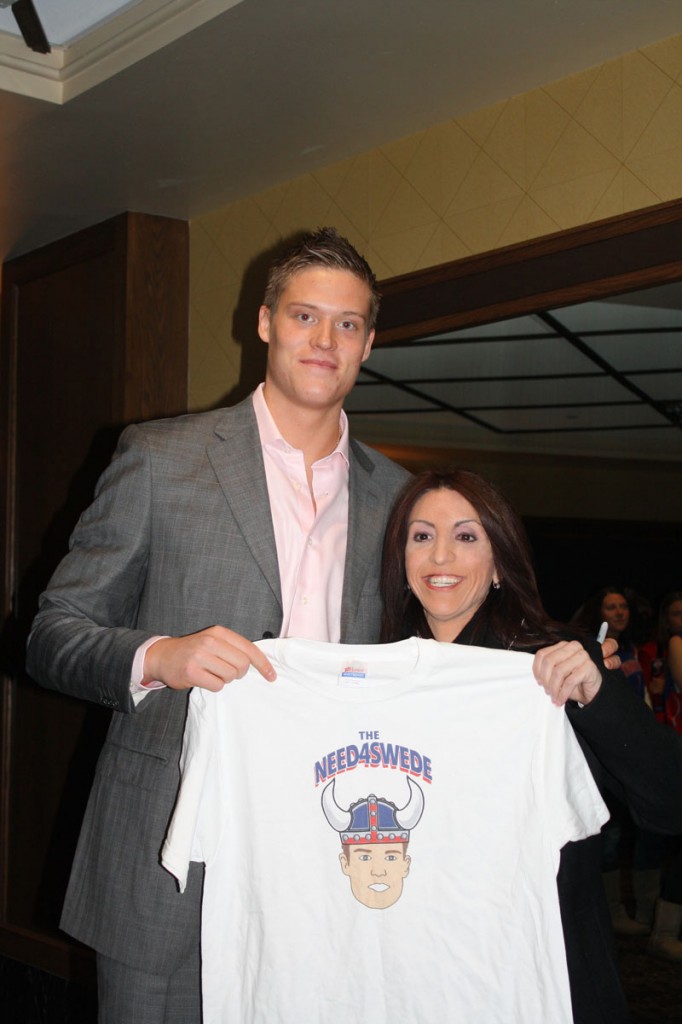 I asked him if he was cool with a little name change around here and he said sure!  So now I have the Swede’s approval if I change this thing over to Need4Swede.com.

If you thought Jonas was a quality player, add quality person to the list too.  I’ve seen plenty of athletes in my day and he’s top shelf when it comes to personality and fan interaction.

After all the fans were gone, the Pistons game the bloggers a quick Q and A with Jonas.  Here is the video for you.

The bloggers, including two I’ve spoke to on many occasions but never met, @PistonPowered and @SteveKays were then escorted to a great lower level suite to enjoy the game.  That’s when I found out that I had a fan.  I was speaking to Mike Garrett of the Pistons about all things Detroit Basketball when he tells me that one of his employees is a big fan of mine.  As I laughed and told him it wasn’t nice to poke fun of me, he continued to tell me he was serious and that he wanted to take a picture of me and send it off to her (hi Shelly), really? After the game one of the Pistons interns came to the suite to escort the bloggers to the post game interview with Charlie Villanueva when I found out I had 2 fans…”You’re Natalie of Need4Sheed right?  I have been following your site for years now, I’m a big fan.”  Who knew.

We then walked to the the bowels of the Palace to wait for the real media to finish their post game presser with John Kuester.  As soon as they were done they sat us in the press conference room where we waited for Charlie to come in.  Understandably after that loss, it looked like the last place he wanted to be, but he sat and answered our questions as well as he could.

Here’s the video for you: 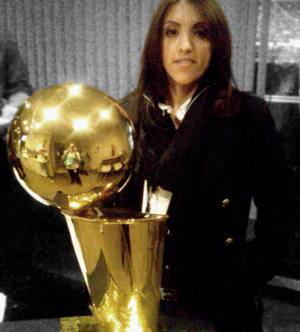 And for the record…don’t let anyone tell you different.  Standing next to the Larry O’Brien trophy never gets old…never.