The Bobcats cause their own Blizzard in Detroit 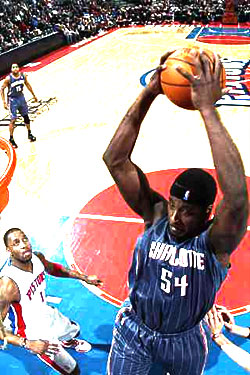 Despite playing their last game of a six day trip in Detroit while after blizzard like conditions, the (if they have it their way) Charlotte Bobcats took an important game Wednesday night at the Palace. Despite going blow for blow with the Bobcats through three quarter, everything seemed to collapse in the fourth for Detroit who lost their fourth straight (97-87) to a team that is fighting for the same playoff sport they are.

Charlie Villanueva: “They made a run and we didn’t have an answer for it,” Villanueva said. “We dug ourselves into a hole late into the fourth and they took advantage of it.”

If you didn’t already know, I attended the game as part of The Pistons Social Media Night.  I had a Need4Swede, was interviewed by Heather Zara for Pistons.com, got to ask Charlie Villanueva about coming off the bench and took video along the way.  Look out for the SWEDEtastic recap of the night very soon.

Cant wait to tell you what Jonas said to me.