With our need to find out the most up to date and “confidential” information on our favorite teams, many of us Follow our favorite teams and players on Twitter to see what’s new, how they are feeling or if they are going to call out another player.  Seriously, who wouldn’t want to know what movie Austin Daye is going to or what Greg Monroe had for breakfast.

And that’s why you have this post, and probably more like it in the very near future.

If you follow our local Pistons or any other of your favorite athletes on Twitter, you hope to get some sort of insight or information or possibly a personal message from your favorite star.  So when it became painfully and comically clear that Rodney Stuckey’s “official” twitter account was nothing more than a RSS feed that someone set up.

Our first hint of the account really not being used by Rodney was when we got tweets that came while Rodney was on court playing.  Then it was Stuckey selling smartphones.

So…just to prove a point, and to make you laugh  I though it would be funny to make up ridiculous headlines just so @stuckeyofficial will tweet them.

Evil, I know, but you all should know me by now.  And to make it even more fun…I’m taking suggestions in the comments.

UPDATE:  It has Officialy been Tweeted by “Rodney Stuckey” 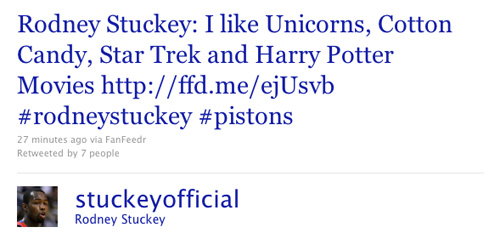