Shame on the “D” – And I don’t mean the Pistons

I have been through a lot as a Pistons fan, the good, the great, the heartache and championships.  I watched Isiah do his thing, Rodman grow and change before my eyes, Lanier and Tripuka come and go and Dumars play and build his way into the hall of fame.  I suffered through the teal years, and did my best to enjoy whatever I could from the team that belongs to my hometown.

I may complain about how bad things are right now, but I’ll stand by them through the tough times that they are going through, as I always do.  That’s what a fan does, they moan an groan  until they are lucky enough to watch their team rise back to the glory days.  And even if they don’t, they will still be there to watch and hope and enjoy.

I was ashamed last night at the Palace of Auburn Hills for the first time in my life.  It wasn’t the same felling of heartache when I watched LeBron take away a game five before my eyes, or when Horry hit that three that still haunts.  This time the state of Michigan disappointed me to a point that I never thought I would get to…ever. 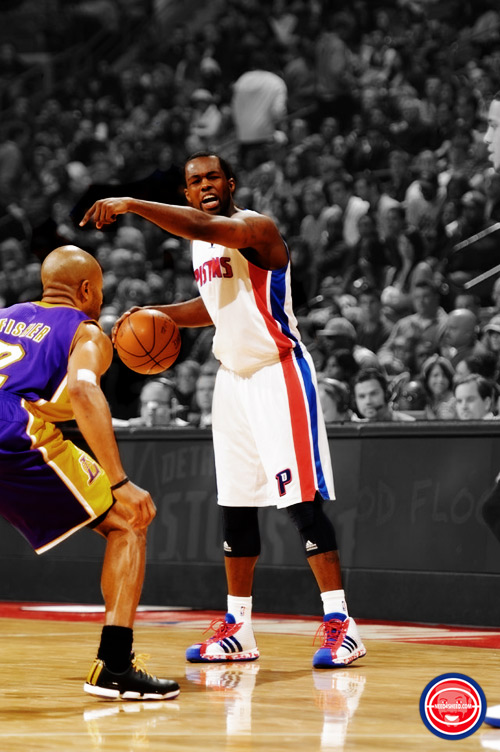 I usually avoid the Palace when the Lakers come to town, for my own sanity, but when your good friend tells you they have an extra ticket to the game and they want you to be there how do you say no?   I knew it wasn’t going to be pleasant, but I didn’t mind.  I was going to be with friends and root for my team.

It started just as I imagined it would as I waited in the West Atrium of the Palace for my friends to arrive.  A sea of Lakers Kobe fans entered the building.  I knew it was going to be a long hard night.   I dissected every single person as they came into the building as my anger grew.   Calm down, I thought to myself, but it didn’t work.  As soon as I saw the 6 year old with a Kobe jersey that was so big on him that it looked like a night shirt my anger turned into rage.

But what set me over the edge, before I ever got to my seat was the Limo that pulled up and out came about twelve 16-20 year olds all in Kobe jerseys.  No Lakers apparel, Kobe apparel.

It didn’t help that my seats just so happened to be in Kobe Ville either.

I’ll spare you the specific details, what I will do is go into a rant.

BUT IF YOU COME FROM THE GREAT STATE OF MICHIGAN born or transplanted, don’t you dare come to the Palace donning anything purple or yellow when you have one of the best and toughest NBA teams to root for in your backyard.

SHAME ON YOU…ALL OF YOU!

You can love Kobe, he’s one of the greatest, (I personally can’t stand him) but shame on you for rooting for a team from across the country in your hometown.

I was ashamed….ashamed of you.

Had it not been for some good friends and the fact that the good people over at the Palace of Auburn Hills don’t play when it comes to lifetime bans, you may have seen me on the news last night.

Lakers fans drowning out Pistons fans in applause.  A Kobe MVP chant in my house, that’s appalling. Do you even understand what you are doing or who you are rooting for?  What’s wrong with you people.

Do you not know the history of this Pistons team?  Do you not know that the Lakers our the Pistons rivals?  Do you understand we are supposed to hate them an everything they stand for?  Do you know what the Bad Boys had to endure to get those first two Championships and who the 2004 Pistons beat to get the third?

I’m not gearing this rant towards my readers, you are the true fans.  The people I’m talking about know who they are, and if they end up reading this…I hope one day an angry Bill Laimbeer comes to visit you.

If you know one of those people, please send this rant their way, for the good of all Pistons fans.