When you’re struggling to win on the road, it’s good to get one in place where they seem to be given away like free candy.

The Pistons survived a hot Eric Gordon, a beastly Blake Griffin, and another bad third quarter to get their first road win 113-107 again the Los Angeles Clippers Friday in at Staples Center.

Detroit was lead by Charlie Villanueva, who scored 30 points, but only pulled down one rebound.

The Clippers were lead by Gordon’s 28 points and Rookie-of-the-year candidate Griffin’s 18 points and 18 rebounds.

Unlike the previous game in Portland, the Piston starters got off to a great start, building a double-digit lead in the first quarter led by Austin Daye’s 9 points.

The lead would reach 10 at the break after a second quarter that saw Villanueva hit 3 treys.

Similar to the previous game (and seemingly all of the others) the third quarter saw the large lead evaporate faster than the Clippers last playoff appearance.

The Clippers surge back into the game thanks to Piston turnovers, rushed shots, and a series of Blake Griffin dunks that electrified the crowd.
[flashvideo file=http://nba.cdn.turner.com/nba/big/games/clippers/2010/11/12/0021000129_det_lac_play4.nba_nba_576x324.flv /]
The fourth quarter saw the lead change several times before the Clippers took a four point lead with just under 3 minutes to play.

Charlie V then knocked down two consecutive triples to pull Detroit within one each time. Then LA’s Rasual Butler hit one to put the home team 102-99 ahead with 29 seconds left.

After some free throw makes and misses both ways, the Pistons found themselves down 2 with 15 second remaining until Rip Hamilton tied things with a left corner jumper.

Rip then made a steal as the Clippers tried to inbound the ball after their timeout, and missed a pull-up jumper at the buzzer that would have won it.

In overtime, Rodney Stuckey and Jason Maxiell converted on free throws and field goals that put Detroit ahead for good. 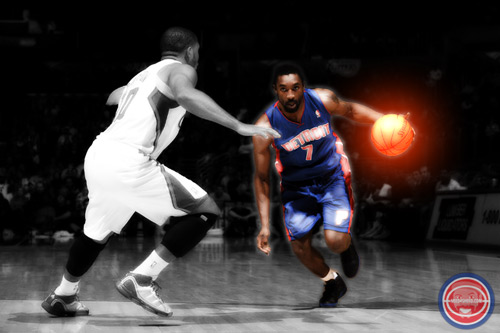 Being that I now live in Los Angeles, I took this one in.