Who’s Blaming Who? – Tayshaun and Kuester

This thing has officially become a hot mess.  Put the four losses aside and look into the words and the body language on the floor during games and you will see a team in trouble.

These were the post game comments from John Kuester after the Celtics loss.

Quite honestly I don’t see much wrong with what Q said, but should he have said it?  Should you really do that o your players in the media when things are going wrong?  If you want your players to play for you….that doesn’t seem like the best way to do it. 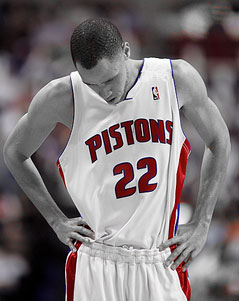 “That ain’t the only thing that’s lacking, he could put it towards us and we could put it towards him. It can go either way. It starts with all of us. …
He’s right, but at the same time, it goes both ways. We can sit here and continue to get on each other and be vocal. But like I said, the right thing’s got to come from him as well as us. It goes both ways. If he wants to say we’ve gotta be more vocal, he’s got to do some things better, too. I mean, obviously, we’re 0-4 so it ain’t just the team. It’s everybody.” via The Detroit News

If you watched the game you know that Prince didn’t exude confidence or patience from his body language.  He looked like a guy who’s checked out.  Maybe he has,  it’s not like he’s in the dark that he’ll probably be somewhere else to finish off the season.

He even got into an argument with a fan behind the Pistons bench towards the end of the game.  And from the from quite a few people who were sitting in the area that heard it,  it probably didn’t warrant a response at all from Prince.

This is what happens when you lose, and from the comments back and fourth…this is just how drama begins.