The Pistons vs The Thunder – Home Opener Live Chat

The Pistons will take on the Oklahoma Thunder tonight to open up the Palace.  This is the same match up as last season’s home opener, but this year the Pistons are hoping for a different result.  The Thunder beat the Pistons 91-83 on Oct. 30, when Kevin Durant scored 11 of his 25 points in the fourth quarter while grabbing 12 boards.

The Pistons will have to bring their A game against the likes of Durant and his Thunder.  With the sting of the Pistons loss in New Jersey still fresh, I think we

Tip is at 8:00 pm and will be broadcast on FSN Detroit.  If you can’t watch the action live, follow the game over at NBA.com or listen on the radio at 9.71 The Ticket.

I just realized today that I haven’t missed a Pistons Home Opener in over 20 years.  That means a couple of things…I’m getting old, and I do love my Pistons. 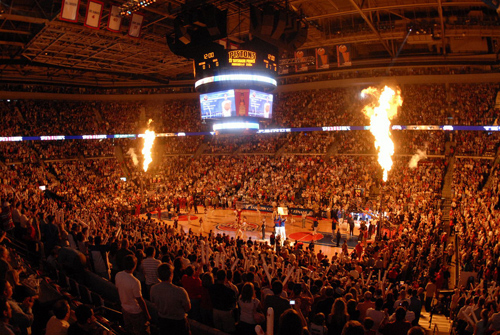 Since I will be at the game, Danny will be hosting LIVE CHAT come game time. You can talk Pistons during the game, but let’s just hope it’s good things.

Be sure to Follow Me on Twitter, you never know what kind of trouble I may get into at the Palace.  I do my best to update you on things you may not see on the broadcast, but best of all I know my fellow Pistons fans have my back when I need updates while I’m in the building.