It’s always tough when one of your players go down, but for the Pistons who were riddled with injuries last season the loss of their spark plug Jonas Jerebko with what looks to be a season ending injury in the starting minutes of their first Pre-Season game hurt.  What it also doses is put holes in the rotation and the starting lineup.

Sure the Pistons are stacked at the position, but who’s ready to be the guy that Jonas was.  Believe it or not Jerebko was a difference maker last season for Detroit.  How do you replace an unknown viking from Sweden who decided to wow us with his hard work, determination and fearlessness?

So here it comes.

Regardless of the fact that Jonas went down, it’s time for Charlie Villanuava to prove to this team and the NBA that he’s a player.

He said he was going to make a point of working all summer to prove it.  So now we want to see it.

The Pistons don’t need for him to lead the team in scoring, though I’ll bet that’s what he would like to do.  He needs to be the big man that Joe Dumars is paying over 7 million dollars a season.  We don’t need sulking on the floor or from a twitter account.  We don’t need 30 plus points a game.  We don’t need another big man that should be banging down low, but who hovers around the three point line.

What we do need is someone who Charlie can be…just ask Jonas.

Grab a board or two, or three, or four.

I’m not trying to be hard on the guy, he seems like a really nice person. We don’t need much in the “D”, hard work is what we ask for no matter what the result.

Just think of Pistons past who did so much when no one really expected it from them.

Remember the Worm Dennis Rodman, how about Rick Mahorn or Bill Laimbeer.  And noone will ever surpass expectation like  Ben Wallace.  You could ask them what it takes and I’m sure one of the first things that come out of their mouths is hard work and determination. 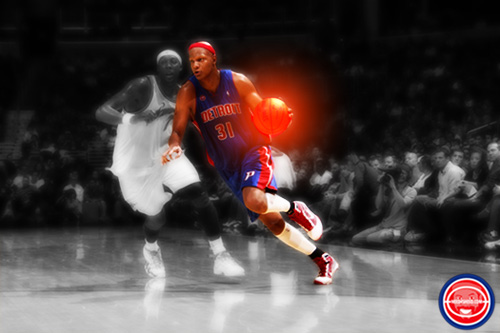