Rodney Stuckey Collapses and is Rushed to the Hospital

The game is irrelevant at right now as we wait for more news on Rodney’s condition.  What we do know is that Rodney will stay overnight in Cleveland overnight for observation. 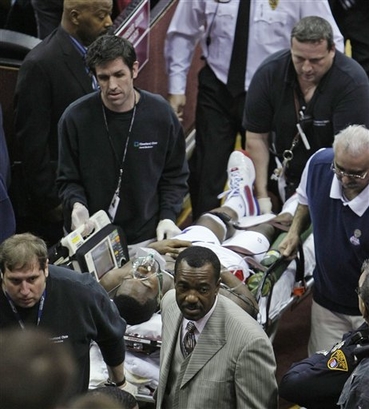 Detroit’s Rodney Stuckey was conscious and breathing on his own as he was taken to a hospital after collapsing on the Pistons’ bench during a game Friday night.

The Pistons said Stuckey was taken to the Cleveland Clinic and his vital signs were stable, but was going for further testing and observation.

Stuckey was wheeled off the court on a stretcher during the third quarter after he collapsed into a trainer’s arms on the bench during the game against the Cleveland Cavaliers.

Stuckey walked off the floor for a timeout showing no signs of illness. After a few moments in a chair, though, Stuckey slumped over.

Medical personnel rushed over to the Pistons’ bench with a stretcher. Play was halted for 12 minutes as the medical staff worked on Stuckey, placed an oxygen mask on his face and wheeled him into an ambulance.

Let’s hope that everything is fine with Stuckey, who has a less severe, but similar thing happen to him last season.

Get well Rodney, this is beyond basketball right now.

Rodney Stuckey was walking over to give rookie Jonas Jerebko some advice Friday night when he started feeling dizzy and sat down.

Shortly after he asked for some water, he slumped unconscious into the arms of Pistons trainer Arnie Kander.

Stuckey was to remain overnight at the Cleveland Clinic after collapsing and being taken from the arena by ambulance during the third quarter of Cleveland’s 99-92 win over the Pistons.

”He is stable and that is good news,” Pistons coach John Kuester said. ”I think he is going to be OK.”

LeBron James had 40 points, 13 rebounds and six assists as the Cavaliers rallied from a 21-point deficit in the first half, but the game was overshadowed by the scary scene in the third quarter.

Pistons teammate Tayshaun Prince sat silent in his chair a few feet away with his head down, and the Cavaliers huddled together near their bench also with their heads bowed as Stuckey was being treated.

Both teams huddled again at midcourt following the game and prayed. Cavaliers general manager Danny Ferry met Kuester as the Pistons left the floor after the game. The two walked to Detroit’s locker room with their arms around each other. Kuester spent the last two seasons as an assistant coach in Cleveland.

”He came over and told Arnie he was feeling dizzy,” Pistons forward Charlie Villanueva said. ”He drank some water and the next thing you know, he passed out. It’s very scary. One minute, you think everything is OK, then the next second, it turns around so quick.”

The players were walking off the floor for a timeout with 2:30 left in the third quarter when Kuester got off the bench to meet them. He was going to say something to Jerebko when Stuckey stepped in.

”I loved that he took the initiative,” Kuester said. ”As I was meeting with the coaches, all of a sudden I saw him leaning over with Arnie and before I knew it, he was on the ground.”

Stuckey, a second-year guard from Eastern Washington, had eight points and 10 assists before collapsing. He missed two games in 2008 with dizziness. It wasn’t immediately known if the incidents were related.

Kuester was shaken by the scene because of his past involvement in similar situations.

”It’s not pleasant to talk about,” Kuester said. ”All that matters is he’s going to be OK.”

The Pistons struggled after Stuckey’s collapse. Detroit led 67-61 when he fell ill. Detroit scored just one basket the rest of the quarter.

”My mind came off the game, of course,” Jerebko said. ”I don’t know if it changed the outcome.”

Prince had 23 points and Richard Hamilton added 20 for Detroit, which lost its sixth straight. The Pistons will head home to face Houston on Sunday. It’s not known when Stuckey will rejoin them.