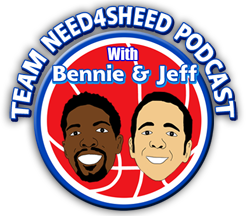 Our good friends Bennie and Jeff are back with their pre-holiday podcast.

What are they talking about?

The struggles of the losing streak.
Do we give the team a pass?
More Stuckey talk:  PG vs. SG.
Your comments.
A little Joe D love.

Don’t forget leave Bennie and Jeff your thoughts in the comments. They are waiting to hear what Team Need4Sheed has to say.