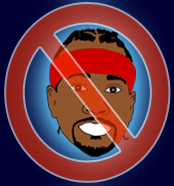 The Pistons can finally (per NBA regulations) remove Allen Iverson from their roster.

From Adrian Wojnarowski at Yahoo! Sports

“Allen Iverson has agreed to terms with the Memphis Grizzlies and will sign a one-year deal by week’s end, a league source told Yahoo! Sports on Wednesday.

He’s expected to sign a $3.5 million contract, with incentives to make more based on performance.

“God chose Memphis as the place that I will continue my career,” Iverson wrote on his Twitter page on Wednesday morning. “I met with [owner Mike Heisley], [GM] Chris Wallace and my next head coach, Lionel Hollins.”

Iverson, 34, met with team officials on Monday in Atlanta, where they discussed his potential role with the team.

“I feel that they are committed to developing a winner and I know that I can help them to accomplish that,” Iverson wrote on Twitter. “I feel that I can trust them.”

After a turbulent season with the Detroit Pistons, Iverson attracted marginal interest around the NBA this summer. Several teams, including the Los Angeles Clippers and Charlotte Bobcats, made inquiries, but only Memphis presented a serious bid.

No contending teams bothered to court the 10-time All-Star after he seemed unable to accept a complementary role.”

I was asked today on Twitter by a follower “does this give you closure”…my answer: If he comes off the bench for the Grizz.

That would be the definition of closure “Bad Boy” style.