Amir Johnson Traded to The Spurs then off to The Bucks 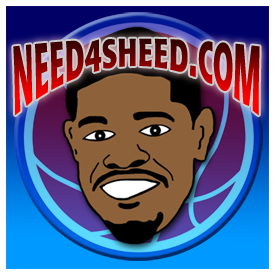 The Amir Johnson experiment is over in Detroit.  Joe Dumars made a with his one time right hand man John Hammond that sent Johnson for the newly acquired Fabricio Oberto, of The Bucks.

“The Pistons have traded power forward Amir Johnson to Milwaukee for center Fabricio Oberto, who was acquired by the Bucks from the Spurs earlier today, according to a person familiar with the trade negotiations.

Oberto averaged 2.6 points and 2.6 rebounds in 54 games for San Antonio last season, although it appears he will never suit up for the Pistons. Yahoo! Sports reports that the Pistons are expected to buy out the remaining year on Oberto’s deal.

Thus, it appears the Pistons can add the $3.6 million Johnson was scheduled to make next year to the roughly $20 million of salary-cap room they already had to spend when they can start negotiating with free agents July 1.” Via The Detroit Free Press

A Sherrod Blakley has a little different take then the Free Press. Detroit will waive Oberto…

“The Pistons are putting the finishing touches on a three-way trade involving San Antonio and Milwaukee that will send Johnson, a former second-round pick by Detroit, to San Antonio and then on to Milwaukee.

The key principles in the trade are Bucks guard/forward Richard Jefferson, who will be sent to San Antonio in exchange for Bruce Bowen and Kurt Thomas.

Meanwhile, the Pistons will send Johnson and cash to San Antonio in exchange for Fabricio Oberto who is expected to be waived by Detroit.

By waiving Oberto, that gives Detroit a little more salary cap flexibility this summer to go out and sign a pair of impact players.” Via MLive

Good Luck to Amir, let’s hope the potiential we know he has can flourish for a different team.  We will all remember him for his first two NBA points

And personally I will always remember him for this.

Thanks to all of you quick on the Email, text massage and the special phone call to make sure we got the news quickly. Too bad I was enjoying my dinner when it all broke…Thank goodness for Twitterberry. If you’re not following me on Twitter…you should be.

I’m sure we will be talking about this more, plus what happens leading up to Thursday’s Draft…which I will be live blogging at the Pistons Draft Party.  Stay Tuned!