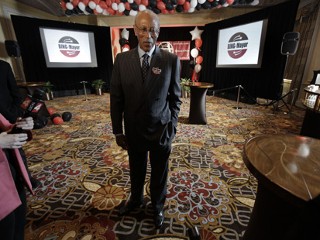 Now that Dave Bing is The Mayor of Detroit, it’s only fitting that I work on a Cartoon Bing.  I got quite a few suggestion via Twitter as well as Facebook on weather to go Old School Bing or Present Day Bing.

It looks like what I was leaning toward won out, you should see a Present Day Cartoon Bing shortly.

All that got me to thinking, I have to start Tooning “The Bad Boys”.  I did Dumars and Isiah so I think the logical one that comes next it Laimbeer but I’m open to suggestions.  I will get to them all sooner or later but does Laimbeer come first?