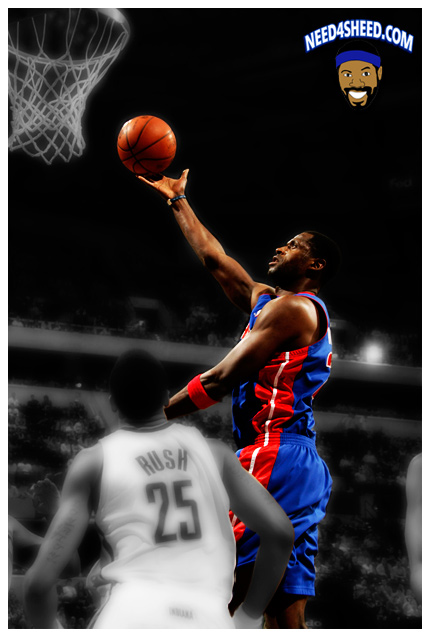 With the 102-106 loss in Indiana Saturday night the Pistons are now a half game behind the Bulls in the Eastern Conference playoff race.

Richard Hamilton is saying all the right things:

“It really don’t matter to us, to tell you the truth,” said Hamilton. “We’re already near the bottom in the playoffs, so at this point, regardless who we play, we can’t worry about who we’re going to play. We’ve just got to know that we made it to the playoffs and hopefully we can have a run.” Via The Detroit Free Press

“There is no worst-case scenario for us right now, the way we’ve been playing all year,” Prince said. “The best-case scenario is we got in the playoffs, so hopefully we can go in there and do some damage. I don’t think being the eight-seed that we’re in a situation we can’t handle. Any situation would have been tough for us, the way we’ve been playing, the ups and downs we’ve had all season.” Via The Detroit Free Press

If Detroit stays in the 8th spot they will face The Cavaliers, who locked up the best record in the East. There is a bright side that Dave Dial points out:

“The Pistons season this year has been pretty tough on fans to watch, but can fans imagine what would happen if Detroit upset the Cavs in the first-round of the NBA playoffs? However unlikely it is for that to happen, it’s something for Piston fans to get behind. Denying LeBron James and Cleveland the chance to contend for their first NBA Title, while possibly ensuring that James lands in New York for the 2010 season, may just be something for Piston fans to get excited about.”

The race is not over yet, with two games to go Monday nights game at home against the Bulls just keep getting bigger.

Sheed picked up his 17th technical foul Saturday one more and he would be suspended. So he’s good for the Bulls, but if he picks one up on Monday, he doesn’t play Wednesday in Miami. Let’s hope Sheed stays calm, especially since Kwame Brown’s hamstring is still iffy. As for Sheed’s techs, all is cleared come playoff time.

So Detroit’s fate rests on their last two games as well how Philly and Chicago finish.  Unfamiliar territory? Yes, but it just makes it that much more exciting. Plus….doesn’t Detroit like playing as the underdog that flies under the radar? Well if this scenario doesn’t speak volumes to their preference, I don’t know what does.