The Pistons, still without Rip, Sheed and A.I., lost in double overtime to the Rockets who where lead by Yao Ming with 31 points, 15 rebounds and 4 blocks. The effort and energy were there, but we couldn’t find the net (38.4% FG-%). Herrmann couldn’t finish the Rockets off in regulation. He had a nice look, but his three point attempt went in & out.

•    2nd chance points and offensive rebounds kept us in the game. We won the battle of the boards 48-45 and took care of the ball.

•   We started the game ice cold, hitting just 1 of our first 11 shots and finishing the 1st quarter with a 26% FG-percentage. It could only go up from there.

•   Kwame Brown had a very good game. He had to guard Yao Ming on his own for long stretches of the game and looked good doing it. In the opening minutes he bricked a layup off the front of the rim and got his 2nd attempt stuffed by Yao…didn’t look to good, but he manned up and played a very solid game. 9 points, 12 boards (7 offensive) for “our” 1st round 1st pick. 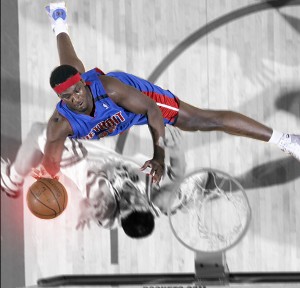 •   Tayshaun Prince and Rodney Stuckey hit a combined 12 out of 42 shots…not so good.

•   Tayshaun’s poster dunk attempt on Yao in the 1st quarter was, like the guy in the NBA Live commercial says, bananas. Too bad he couldn’t finish it.

•   In the 4th the Pistons looked like they just wanted to win more than the Rockets did. Bynum opened the final quarter of regulation with a 4-0 run of his own.

•   I still don’t know why Yao got to shoot free throws after he punched Kwame in the face. I’d love an explanation for this one by the referees.

•   Arron Afflalo was a big reason this game was close even though our core guys couldn’t hit their shots. 4/6 from three point land on his way to a career-high 24 points! 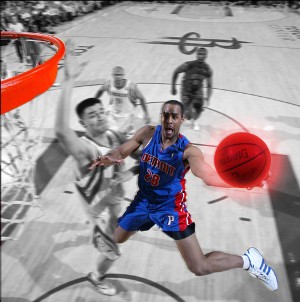 •    Yao was their go-to guy in the final minutes of the 4th quarter. He scored 7 straight points for them so we had to switch McDyess on him and deny him the ball. He didn’t get to touch the ball in the final minute of regulation.

•   We had a chance to win the game, but Herrmann missed his shot (in & out). Too bad. A buzzer-beater would have been really nice.

•   Afflalo hit one of his big threes to keep us alive.

•  The Rockets ran their offense through Yao and Scola who combined for their last 19 points sometime through the 1st overtime.

•    In the final minute, it was STUCKEY-time. Rodney drove to the rim and finished a sick left-handed layup off the wrong foot to make this a one-point game.

•    Lowry missed one of his two free throws giving us the chance to tie the game and that is what Stuckey did. Another amazing drive to the hoop, splitting the defenders thanks to two well placed screens by Tayshaun and McDyess for a quick two points.

•    With 16.5 seconds left on the clock, the Rockets had all the time they needed to get a good look at the rim, but our defense was just too good. They couldn’t get the ball to Yao and finally settled for a tough Ron Artest fall-away jumper that had no chance of going in. 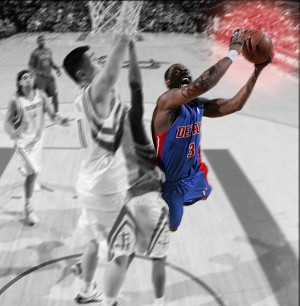 •   “Ooooooh, he banks it in…” – that’s what one of the ESPN commentators said after Maxiell hit a free throw off the glass. “And nobody seems to be surprised” is what he added moments later.

•   The Rockets got a 10 point lead really fast and the game looked like it was pretty much over.

•   A 7-0 run, including a Herrmann 3, made this a one possession game again, but we had to foul because there wasn’t much time left. The only way we could win is if they would miss a free throw or two. We sent Brooks to the line twice, but he withstood the pressure and the game was over.

You can find the game recap here.