Sorry that we are a bit late today, but the time difference is messing with us. Anyway, I hope you had a nice St. Patrick’s Day in your favorite pub and that you haven’t drunk so much that you hardly could go to work today like…uhm, a friend of mine. With Richard Hamilton sitting on the side line because of a strained left groin, Arron Afflalo started as shooting guard. Let’s get this recap started:

•  The game started with Dallas’ fans chanting “Defense! Defense!”. An obvious sign that the playoffs are     around the corner. Both teams really needed a W to get a step closer to their goal of playing in the postseason.

•   Rip was out with an injury that forced him to miss 8 games earlier this season. “It hurts me; it kills me,” Hamilton said in the locker room Tuesday night in Dallas. “It kills me more than anything because mentally I’ve been trying to trick myself. I’m trying to trick myself to say that I’m all right, I’m all good.”

•   You won’t find this game on the Pistons’ “Most Memorable Games” DVD-Collection, but midway through the 3rd it became a good game.

•   I was in the unfortunate situation, thanks to the League Pass, that I had to watch the Dallas broadcast. They called this game “The Dampier Show” after Damp scored 6 points in the opening minutes. Embarrassing…you don’t want to play in a game where Dampier is the best guy on the court. That is just wrong on so many levels.

•   With Rip (left groin strain) and Sheed out, Prince was our primary scoring option taking 7 shots in the first 5 minutes. Not his style, but the best we could come up with. 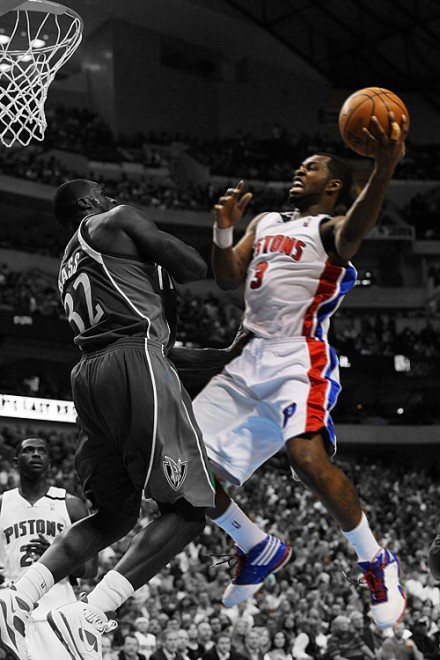 •    Afflalo was good tonight. He hit two shots from downtown in the 1st quarter and a very big three-pointer in the closing seconds of the game. He finished the game 4/7 from three-point land and proved that he deserves more minutes on a regular basis.

•   Unfortunately, I missed the first 5 minutes of the 2nd quarter so I can’t tell you how we went down 13. Maybe somebody in the comments can help me out? Would be appreciated.

•   We couldn’t stop them from getting easy buckets; they even started toying with us. Kidd threw an alley-oop pass up for Terry, but he couldn’t finish it.

•   Every time Dampier got the ball down low on his way to 16 points, every Piston fan felt the need4sheed. We really miss his interior defense.

•   Need for Rip? Definitely! Our offense was stagnant for long periods, nobody moved without the ball – only switching from corner three spot to the other corner three spot. Everybody started picking his spots and waiting for the ball. You can’t play basketball like that and expect to win – especially when your opponent shoots 56.7% for the game.

•   Dallas went up 17 points in the middle of the 3rd. That was the point things started getting better for Detroit. Will Bynum gave us a spark off the bench (again) and made things happen. Fast & Furious! That is his style. He finished the game with 19 points and a couple of rebounds and assists, but stats don’t tell the whole story here. He carried us through stretches of the game.

•   Maxiell finished the 3rd with two nice dunks. An And 1 and a put back of a crazy Bynum drive to the hoop. Unfortunately, these were his only 5 points in 26 minutes on the court.

•   We started the 4th with a nice dunk courtesy of Tayshaun Prince. He posterized a Mav, but I won’t drop a name here –I don’t want to embarrass that poor guy more than he already got embarrassed by Tay. Prince did everything possible, finishing with 28 points, 7 boards, and 3 assists.

•   We scored on 8 consecutive possessions in the 4th and the game was suddenly close again. Who could see that coming? 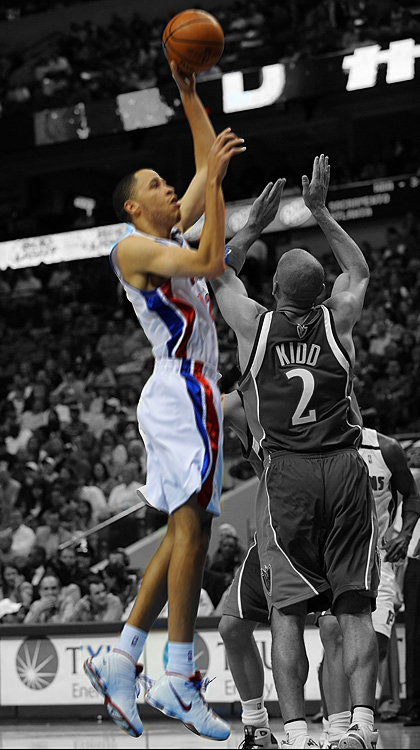 •   Rodney Stuckey attacked the rim more this game. That is a good sign, but his shot wasn’t exactly falling. He scored 17 points and dished out 7 assists.

•   Dallas took a time-out with 6 minutes to go. Coach drew up a play; here is a little transcript if you missed it. They inbounded the ball to Dirk on the elbow. Dirk stared Kwame down for about 5 seconds and drained a jumper in his face. Nice play, Carlisle! That’s why he gets paid to coach and we don’t.

•   Arron Afflalo hit a big three with 1 minute to go and Dallas’ lead was down to 5 points.

•   We had to foul Jason Terry who hit both freebies.

•   Will Bynum scored a quick two points and we had to foul again. This time we sent Dirk to the line and he missed the 2nd shot. Dallas lead: 4 points. BTW: Dirk was killing us all night long, he had a game high 30 points.

•   The Dallas broadcasting team showed a fascinating stat: Of the 60 games they played, Dallas is 14-3 when the game is decided by 5 points or less. What does that tell us? Well, they won quiet a few close games, but the only lost 3 times by 5 or less – this means they get blown out quiet often. Nice stat.

•   Prince scored on a quick drive to the hoop and we were forced to foul again with 4.9 seconds left. Jason Terry hit both shots and iced the game.

•    “I was very pleased with our effort,” Detroit coach Michael Curry said. “We stuck with it, continued to fight and did a lot of good things. … If we put in the same effort with (Hamilton) tomorrow, we’ll be good. If he can go, he will.”