The Pistons host the 36-9 Cavaliers this afternoon at the Palace. Tough Detroit won their first meeting with the Cavs this season, Detroit has lost 8 of their last 11 games while Cleveland is the #2 in the Eastern Conference standings.

Peter Vecsey of the New York Post seems to think Curry has lost all control.
“Has Michael Curry lost control of the 25-20 Pistons and the respect of the players? Did he have it to lose? Numerous players didn’t much care for Flip Saunders. Now it’s more a lack of confidence in the rookie coach than a dislike of him, from what I’m told. “No confidence” is more like it, a veteran confided to a friend. “Psychologically we’ve lost confidence in him and I don’t know how you get that back.” Biggest gripe from two veterans: They’re convinced Curry is being told who to play by Joe Dumars.”

Can’t read much into it considering Vecsey sources (if you can call them that) are rarely accurate. But I still thought I should put it out here for you.

This will be Vladan and Martin’s second Pistons game of their life, and just because they are all the way from Austria doesn’t mean they don’t have Detroit spirit.  They know how to hate Cleveland just as much as we do.

Just check out the shirt Martin has on! 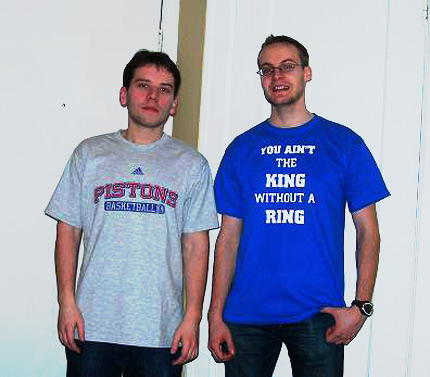 So if you are headed out to the game this afternoon and see our friends from Austria, (who, I just found out have an NBA Blog of their own) please give them a Pistons welcome.

Tip off is at 2:30 P.M. and Nationally Televised on ABC. If you can’t watch the broadcast, tune into 1130 AM WDFN The Fan.  Can’t do either? Follow the game on NBA.com.