A Trip to Remember – Europe to Detroit

I take things for granted, we all do. No matter if it’s something big or very small, it’s human nature. I am not going to get into everything I am thankful for, but tell you that after hearing Vladan and Martin’s story I realized I have taken Deeetroit Basketball for granted for most of my life.

I get a ton of emails from readers of the site and it’s very rare that they don’t make me smile, so when I read Vladan’s email a few months back it made me more than just smile….it made me realize how lucky most of us are.

We are from Austria (Europe) and we are big Pistons fans, at least we
Keep telling this to ourselves when it’s 2 AM here and the game is just
About to start. It’s not easy being a Pistons fan in Europe.  As you can imagine, there is hardly any NBA basketball on TV and you can only watch League Pass games sometimes. Have you ever watched a game with Chinese commentary (because there were no other possibilities)?
You should try this. It really makes you appreciate the real deal.

Well, we’ve been talking for years about going to Detroit to watch a few games of our favorite team, get a feel for the town we feel so connected to even without ever really being there and see how life is like in Motown.

We are part-time working students so we had to save money for a while to make this happen…and we finally decided we will go on this trip.

You probably are asking yourself two questions right now.
1.) Why are two students from Europe, who have never been to Detroit, Pistons fans?
2.) Why are we telling this to you?

Well, the first question is easy.

Team basketball and they have a certain vibe to them. Just the way they behave and their attitude separate makes them stand out above the rest.

The answer to the second question will take a bit longer:

We have booked our flights, hotel and stuff like this. We know how we will get there and we’ve read about a few things worth sightseeing, but we don’t know obvious stuff – obvious to you, but not nearly well known enough for us Maybe you can give us some tips about where to go/where NOT to
We look forward to soaking in as much as we can.

I don’t know how early you plan the need4sheed “meetings”, but if it
Is in the same time when we are in Detroit, we would definitely join you.
That would be pretty cool.

Any information/tips/help would be appreciated,
Best regards
Vladan & Martin

Well Vladan and Martin Arrived yesterday! And guess what, they just happened to be in town when Need4Sheed is having one of our “gatherings.”

We arrived in Detroit a few hours ago. Flight was good (but a bit long, tho – total flight and waiting time was about 15-16 hours). When we arrived at our hotel, we didn’t like it, but that was probably because we were pretty tired. Now that we found out we have Digital Cable and High Speed Internet, we are pretty happy again.

Anyway, we had time to explore the city a bit – we’ve been to Greektown and some streets around our hotel. We had dinner at “Coach’s Corner” and watched the 1st half of the Cavaliers – Magic game on TNT. That isn’t even remotely possible in Austria. We really enjoyed it even tho we were the only people there except for the waitress. I guess that is because it is pretty cold and because the Red Wings play tonight, but who knows.

Our cab driver told us everything we need to know about the town…but I’m not sure he knows what he is talking about. He thinks Shaq is playing for Miami and that the Lions actually won a game or two this season…crazy. He was very nice tho.  He told us about the city’s problems and it is pretty depressing. Just sad to hear how people struggle right now in Motown. I hope it will get better soon.

We’ll be at the Palace tomorrow for the Celtics game as you already know. 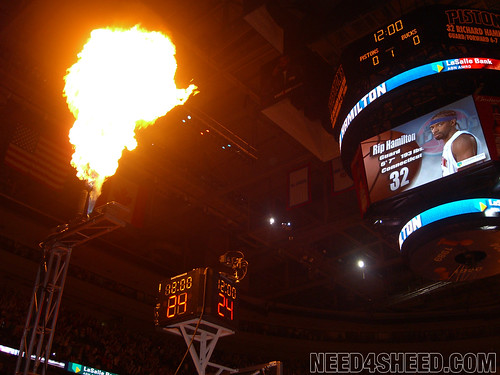 Well I’m going to see Vladan and Martin in a couple of days, in fact I will be lucky enough to enjoy the game (and a little more) with them.

Now I’m reaching out to you for them….
Give them some tips on where and where not to go while in Town…
Remember, they are limited when it comes to transportation.
Help them get the best out of their time in The D, and let’s hope our Pistons don’t disappoint some loyal fans from across the globe who saved up for longer than we can imagine to see them play!