As reported on ESPN.com:

“Kwame Brown’s agent, Mark Bartlestein, told ESPN.com on Monday night that the former No. 1 pick in the 2001 draft has reached a verbal agreement on a new contract with the Detroit Pistons.

The contract is believed to be a two-year deal worth $8 million, with Brown — who spent his first four seasons as a pro in Washington after being drafted by then-Wizards president Michael Jordan holding a player option to return to free agency after this season.”

So Kwame is The Answer? Really? 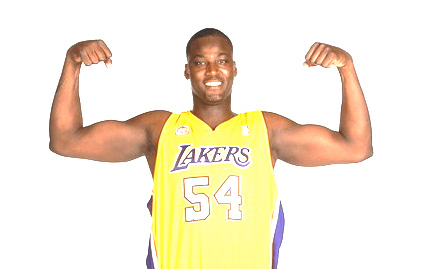 Thanks to WDFN, Pistons4Life and the rest of Team Need4Sheed for making sure we didn’t miss a beat.

UPDATE: After having this one sink in a bit I think we could be happy with the signing. We picked up a legitimate center for a good (not great) price. Yes, he’s a bust as a #1 pick, but that’s on Jordan not Joe. For the role we need him in he should do well (we hope).

Maybe we should give this one a chance Pistons fans, like most of you I was a bit stunned when I first heard the news, but we might be in for a surprise. I just hope this doesn’t hinder the development of Amir, Samb or even Maxiell.

I’m not devastated, I’m not optimistic, I’m just not sold.

What’s next, the return of Fennis Dembo? Funny, had you asked me this morning which was more likely Kwame or Dembo I would have picked the latter.

I can’t believe I’ll be making a Kwame Brown Cartoon.