Davis and Harrington to The D?

Add this to the swirling trade rumors surrounding The Pistons this off season. According to “sources” The Pistons would be willing to send Chauncey Billups and Rasheed Wallace to Golden State for Baron Davis and Al Harrington. 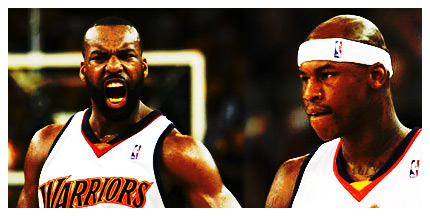 Via The Contra Costa Times

“A team source said that Davis has told teammates he will not exercise the opt-out provision in his contract before its June 30 expiration date, meaning that he will play out the final year of the deal at a salary of $17.8 million.

Given that stalemate, it’s possible that Davis, who wants to stay in the Bay Area but was disappointed with the lowball offers from the Warriors, will ask to be dealt. And the team source said that the Detroit Pistons, rebuffed initially in their attempts to pry

forward Carmelo Anthony from the Denver Nuggets, are now looking at Davis as a potential target.

Joe Dumars, the Pistons’ president of basketball operations, gave notice after losing the Eastern Conference finals that no one on his veteran-laden team would be safe, and the source said Detroit is willing to divest itself of longtime stars Rasheed Wallace and Chauncey Billups.

Wallace, like Davis an unrestricted free agent after ’08-09, would give the Warriors their best true power forward since Chris Webber’s first stint in 1993-94 and has 3-point range that coach Don Nelson would love.

And the inclusion of Billups, who has been made more expendable by the emergence of rookie Rodney Stuckey last season, would ease any concerns from Nelson about the point guard position. Although Nelson thinks Monta Ellis eventually needs to move to point guard, he played him primarily at shooting guard on offense last season, allowing Davis to quarterback the team.

Since Wallace and Billups will combine to take home nearly $25 million in 2008-09, the Warriors would need to add more salary ballast to Davis in order to make the salary-cap numbers work.

One possibility in that role would be forward Al Harrington. A source close to the 10th-year forward said he is currently leaning toward requesting a trade from the Warriors this summer, although he will not make a final decision until after the draft.”

I am not sure what rumored deal (Josh Smith, Carmelo) I like the best, but you can be sure that things will start to take shape after the NBA Daft takes place tomorrow night.

UPDATE : Chris McCosky of The Detroit News says there is no truth to this rumor.

“Pay no attention to the report out of Oakland that the Pistons and Warriors talked about a deal that would send Rasheed Wallace and Chauncey Billups to Golden State for Baron Davis. That deal was a total fabrication, nothing of the sort was ever discussed.”