Do the Piston need another Buddha?

With all the trade talks swirling in Piston Land and the fact that just about everyone is compiling their dream teams, it got me thinking. What really do the Pistons need?

I looked back at the ultimate Pistons teams, you know the ones that brought us two Back to Back Championships. If you look back at what that team had that made things work it was pretty simple. They had possibly the best three guard combo in Dumars, Thomas and Johnson. Solid G/F Mark Agguire, Dennis Rodman, Laimbeer, Salley and Mahorn in 89.

The current Pistons aren’t that far away from what those teams had when you really look at it. You can argue about how things stack up talent wise considering that roster had two Hall of Famers on it, but one thing for sure you can’t deny is that team had heart.

Now before you decide what Detroit really needs to get over the hump and since Dumars has tried to model his teams around the successful ones he played on maybe what this current roster needs is another James Buddha Edwards.

A big F/C that Detroit could go to out of the gate and consistently score in the paint, play defense and defer to his teammates when need be. Tall order I know, but the numbers don’t lie…and neither did the mustache.

His teammates as well as fans truly appreciated what Edwards brought to the team. 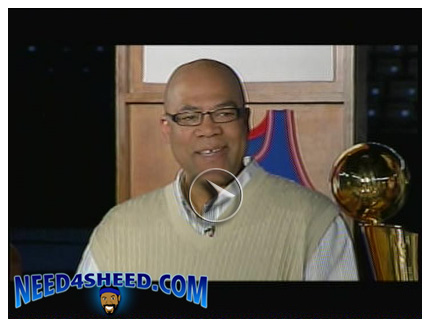 I sure wouldn’t mind another guy like Edwards on this team.