Nuggets say No to Pistons offers for Carmelo

Looks like it’s not just idle chat, it seems The Pistons are in ongoing trade discussions with the Denver Nuggets. 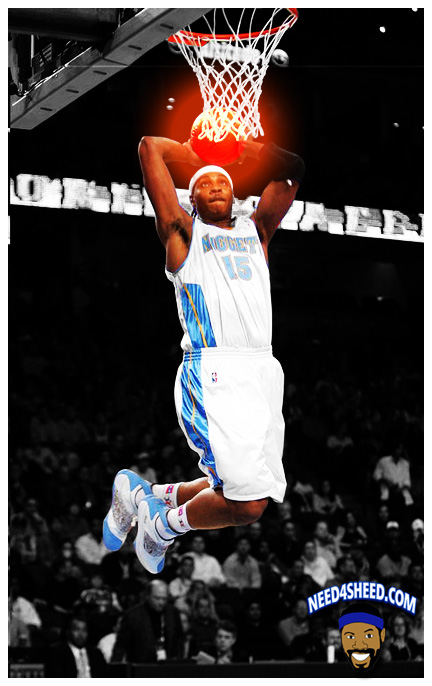 The Detroit Free Press is reporting:

“The Nuggets want to bring point guard Chauncey Billups back to his hometown, and the Pistons are looking to make good on their botched 2003 draft and bring high-scoring forward Carmelo Anthony to Detroit, the person confirmed.

But while talks are ongoing, the Nuggets, at this point, are reluctant to include Anthony in any deal. The Pistons source said the sides are “not even close” to an agreement. It’s unclear what it might take to pry away Anthony.

ESPN.com reported, without citing a source, that the Pistons offered Billups and Tayshaun Prince for Anthony. But the Nuggets weren’t interested. Denver countered with an offer of Allen Iverson or a package featuring Marcus Camby, but the Pistons are only interested in Anthony.

President Joe Dumars said at his season-ending news conference that he wanted to bust up his core this summer and that he was open to moving any player besides point guard Rodney Stuckey.

“There are no sacred cows here,” Dumars said. “You lose that sacred-cow status when you lose three straight years” in the conference finals.

Dumars also has said he is not interested in other teams’ second- or third-best players, a category into which Iverson and Camby would fall.”

I sill have to believe that nothing will go down until Draft day or right after so the Pistons can weigh all their options. As we know…Joe is dead serious about shaking things up for the right deal.

UPDATE: Carmelo’s Agent says Anthony will not be traded.
Via ESPN.com

“He’s not going to be moved,” Calvin Andrews said in a telephone interview Sunday. “It’s not happening. We’ve been given assurances from the owner on down.”

Three sources with knowledge of the situation said Saturday afternoon that Andrews, and possibly Anthony, had planned to meet with the Nuggets on Monday to discuss Anthony’s future. Anthony, who does not want to be traded, is bothered by his name being mentioned in rumors and upset because the Nuggets have not come out publicly and denounced a possible trade, the sources said.

That issue was going to be addressed at Monday’s meeting and if Anthony’s party wasn’t satisfied with the Nuggets’ answers, they were set to ask for a trade, the sources said.

But Andrews said Sunday he will not meet with Nuggets management. He will be in Denver this week but only to attend Anthony’s court case for driving under the influence of alcohol. He has a court date Tuesday on the charge.

“I’m going there to be supportive of Carmelo,” Andrews said. “If he’s charged, there will be a penalty and I’ll talk with the Nuggets about that. If the trade situation comes up, we’ll talk about it, but there is no meeting planned to discuss trades.”

Denver was recently contacted by Detroit, and the two clubs had several conversations about swapping Anthony for Chauncey Billups and Tayshaun Prince. The Nuggets decided against it and instead proposed a deal involving Allen Iverson or a package built around Marcus Camby. But the Pistons are only interested in Anthony.”

From The Rocky Mountain News:

“Andrews said Anthony, who wants to stay in Denver, has regularly asked him to get the Nuggets to publicly state they won’t trade him. But Andrews said he’s been unsuccessful.

“In response to your requests this weekend, as a matter of practice I don’t comment on rumors, trades or the NBA draft,” Nuggets vice president of basketball operations Mark Warkentien wrote Sunday to the Rocky in an e-mail.”

Another UPDATE
From Chris McCosky of The Detroit News

“Have the Pistons and Nuggets talked about the possibility of trading Chauncey Billups and Tayshaun Prince for Carmelo Anthony? Yes.

Are the talks recent and on-going? No.

Is the deal dead? Not quite, but nearly.

Here’s the deal (this will be on the detnews.com website in a more formal manner later on tonight): Two weeks ago, Nuggets vice president Mark Warkentien called Pistons president Joe Dumars. A story had leaked out of Denver that the Nuggets were interested in Billups. Warkentien called initially to apologize for the information leak, but in the process, asked Dumars what it might take to pry Billups away. Dumars said, straight-up, Anthony.

They talked about that for a bit. Prince was added because, obviously, Anthony plays Prince’s position. But in the end, Warkentien said the Nuggets weren’t looking to move Anthony. He asked if Dumars wanted Marcus Camby or Allen Iverson. Dumars said no. If the Nuggets wanted Billups, then he wanted Anthony. That’s where it ended. Two weeks ago.

But, the rumors persisted. In the meantime, Anthony started to get upset. He had his agents confront Warkentien about the rumors, which led to the reports Saturday night that the Nuggets “vetoed” the proposed trade.”