The Pistons Season Wrap up on myTV20 Detroit closed with a very fitting video set to the song Simplicity, a song inspired by the Pistons by season ticket holder Bob Seger. It’s a great recap of the season with a bevy of the year’s best plays and well as what may be a final farewell to those we have come to adore.

Thanks for the memories boys…it was a hell of a run. 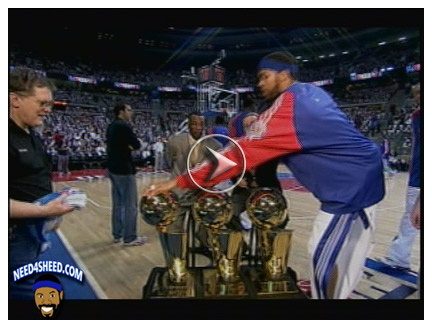 I used this specific screen cap for the video because I was very close to this when it happened and thought Rasheed searching out the 2004 Trophy and touching it before the first game of the Playoffs started was a sign of good things to come.

I have been know to be wrong on many occasions, too bad this was one of them.