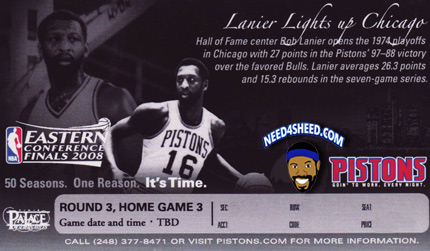 We know Rip is going to give it a go tonight, let’s hope his elbow doesn’t bother his shot too much.

Sheed needs to bring his game, not his mouth.

Chauncey need to be Big.

Tayshaun needs to play up to his abilities.

Dyess needs to bring his heart.

And everyone else needs to play like they want it.

And a little more from Rasheed Umar, a member of Team Need4Sheed who has no idea I am posting his inspirational e-mail he sent me last night.

“The sky is calm on the eve of the biggest game of this era. Time to focus, play through injury, and frustration. This is what we live for an opportunity to go against the grain and prove the naysayers wrong. The city and the fans are behind you and we know you believe. Never mind the referees, your opponent is yourselves. People will gather, faces painted, Thundersticks clapping, music blasting at inhuman tones. The ball will be tossed and the work whistle will blow. Punch the clock at 9- play hard, shout, block shots, rebound, dribble down the lane, and finish the job-punch out at five. At the end of the night the place will be in rubble, series tied -the Pistons were here.”

Tip off is at 8:30 PM and will be Nationally televised on ESPN. If you can’t catch it on the tube you can always tune in to 1130 AM WDFN The Fan, or stream it live through your computer at NBA.com .

I’m off, with my throwback Chauncey Jersey, my Pistons kicks, my obnoxiously loud whistle and a Ice For Dyess poster.

Noting more to say but, the comments are yours! Win Or Go Home.