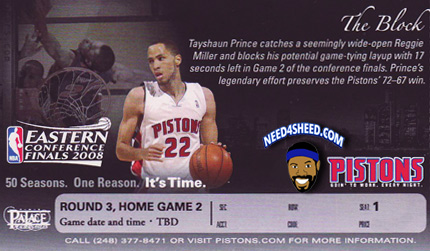 Don’t kid yourself Pistons fans, down 2-1 in the series after their loss at home Saturday, Detroit needs to win game four. We haven’t received a Guaransheed, but if I had to put money on something, I would lay it down on seeing a Detroit Pistons team that knows what’s at stake and one that will play like it.

Chauncey Billups is the key to the series and after his performance in Game Three, his injury may still be a huge factor, Arnie or not. The thing that may do us in is the fact that Billups and ultimately Saunders may have a struggling Billups out on the court rather than Rodney Stuckey. From what I have read today it seems the two are on opposite sites of the argument.

I was thinking about the whole situation during game three when Saunders substituted Stuckey for Billups late in the game when Rodney was clearly sparking the team. I’m not the only one who hopes Billups gets shut down if he plays the same in Game 4 as he did in Game 3.

I’m planning on being tied 2-2 by morning, but we still have a game to play confidence or not.

Tip off is at 8:30 PM and will be Nationally televised on ESPN. If you can’t catch it on the tube you can always tune in to 1130 AM WDFN The Fan, or stream it live through your computer at NBA.com .

The whole White Out deal threw off the mojo I had with my red Sheed jersey, so for support the new playoff gear (until we lose) is my throwback Chauncey Billups jersey. If you need to get pumped before the game, there is nothing better than watching this, let’s truly hope They’re Back……

The rest Pistons fans is up to you, leave ’em in the comments.