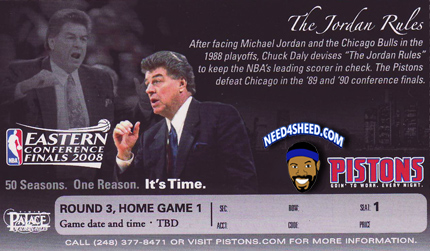 With the Series tied at on a piece, Detroit needs to win both games at home to secure the home court advantage they gained by taking Game Two in Boston. I know I will do my best to live up to Rip’s confidence in the fans tonight at The Palace.

Tip off is at 8:30 PM and will be Nationally televised on ABC. If you can’t catch it on the tube you can always tune in to 1130 AM WDFN The Fan, or stream it live through your computer at NBA.com .

As you all know I am having a hard time not going with my Sheed Red Jersey since Detroit hasn’t lost a game when I have been in the building with it on. It actually dates back to one of the last home games against Toronto. In the playoffs the jersey is 5-0, so I will be heading to the game in it and am still thinking about whether or not to put on the white over top. Sounds crazy, but I do my part to keep my routines going when they work. I am not a fan of the WHITE OUT, in fact I think it has been done to death and Pistons fans represent well enough all season. So if you see someone in a red Sheed jersey sticking out like a sore thumb, it’s me.

I’ll do my part, the rest my fellow Pistons fans is up to you. Leave ’em in the comments, and again thanks for those of you keeping me up to speed in the comments on things I miss during the broadcast (I read the comments as you send them from my seat.) How did I live without a Blackberry for so long?