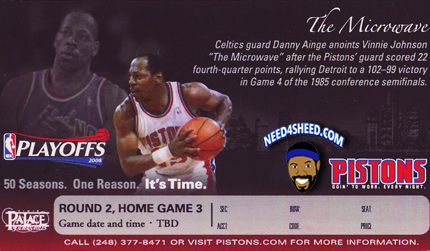 The Pistons have the chance to end their second round matchup tonight at home against Orlando. Up 3-1 Detroit would love to wrap this one up tonight and wait on the winner of the Celtics – Cavs series for their sixth consecutive trip to The Eastern Conference Finals.

Chauncey will likely be a game time decision again today, though feeling a bit better he’ll only play if he’s close to 100%. Joe Dumars seems to think he may give it a go.

Rip is on the verge of becoming the franchise’s all-time leading scorer in the playoffs. He needs just 11 points to pass Isiah Thomas, who holds the record at 2,261. Crazy thing is it only has took Rip six seasons to do it.

I’m expecting a fight from both teams tonight, so this one should be good (not that they haven’t been thus far.)

Tip off is at 7:00 PM and will be Nationally televised on TNT. If you can’t catch it on the tube you can always tune in to 1130 AM WDFN The Fan, or stream it live through your computer at NBA.com.

Just in case you were wondering, my playoff Palace ensemble of the Red Sheed and Pistons Kicks is 4-0. See, I do my part.

I am hoping The MOVEMENT travels to The Palace tonight, since it’s clearly growing.

The rest Pistons Fans is up to you in the comments.