Round 2 – Pistons vs. Magic Game One 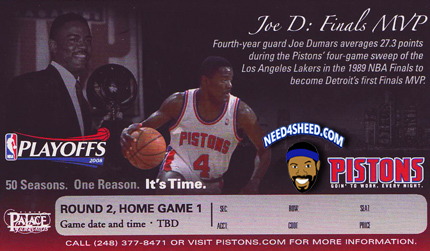 After the surprisingly difficult task of putting away the Philadelphia Seventy Sixers in the first round of The Playoffs, The Pistons now have a whole different beast to deal with. Dwight Howard, who’s game has improved leaps and bounds this season, will be be the focus of Detroit’s game plan. Dwight averaged 22 points and 18 boards in Orlando’s first round series with The Raptors, but I will be shocked if he puts up those kinds of numbers against a defensively minded team like The Pistons. The Magic aren’t just a one man show either with Rashard Lewis and most improved player Hedo Turkoglu.

Hedo and company may be a bit tired considering they were out clubbing last night to prepare for Game One.

If Detroit’s backcourt can take advantage of their matchups and if Tayshaun Prince keeps playing the way he has it will be a tough task for The Magic to pull off an upset of Detroit. Look for the Pistons to exploit Chauncey’s matchups with either Nelson or Arroyo and Rasheed Wallace and Ratliff to concentrate on keeping Howard off his game.

“We know that they’re going to be physical, but we’re not going to back down an inch,” Howard said. “Rasheed is a great, great player. We have to be smart because we know he’s going to talk trash and be Rasheed Wallace. But we’ll be ready.” Via The Detroit Free Press

Don’t expect a Swiffer like last season, but if it happens I won’t complain. Here is the schedule for Round 2:

Tip off is at 7:30 PM and will be Nationally televised on TNT. If you can’t catch it on TV you can always tune in to 1130 AM WDFN The Fan or stream it live through your computer at NBA.com.

I’ll hold it down at The Palace while you do the same here…Leave ’em in the comments.