McDyess Breaks His Nose and Inspires His Team

The Pistons got a little more intimidating after Game 3 against the Sixers. Two masked men on one team at the same time is one thing, but when one of them inspires their teammates to go out and get the job done is another. ]

We all know just how bad Dyess wants to win it all, so after Detroit’s lackluster start to Game 4 against the Sixers, he not only inspired his team by his play, but the quiet McDyess also did it with his words. MYTV20 Detroit ran this story (video) of Dyess and his mask before the Pistons Game 5 victory. 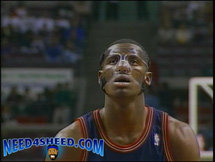 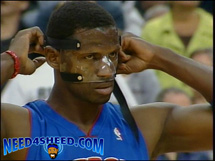 Who in their right mind wouldn’t be pulling for this guy?