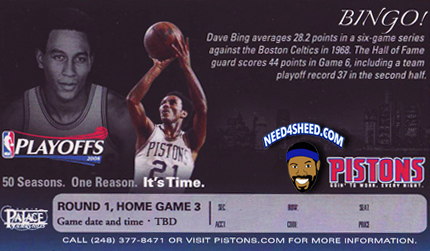 The Pistons will try finally take the lead in the series tonight at the Palace. Here are a few things of interest before tip.

Tip off is at 7:00 PM and will be Nationally broadcast on NBATV and locally on myTV20 Detroit. If you can’t catch it on TV you can always tune in to 1130 AM WDFN The Fan or stream it live through your computer at NBA.com.

We all know how important this game is and I have no doubts that Detroit is going to get things done tonight. I will be at the Palace tonight being as loud as humanly possible and if you are going to be there too, I expect the same.

I will leave you with a great comment from Team Need4Sheed member Amer-ican Prince from the comment section….
“Come on Pistons let’s be sailing on a Ship and not fishing on a boat”