He will be missed – Will Robinson dies at age 96

A truly sad day….
“Will Robinson, who was the first black coach of a Division I college basketball program and a legendary evaluator of talent in both basketball and football, died on Monday. He was 96.

Robinson died at a Detroit hospital, said Detroit Pistons spokesman Matt Dobek. Robinson had been sick for 15 months and in a nursing home for more than a year, Dobek said.

Robinson made history when he became the first black Division I coach, leading Illinois State in the 1970s.

Click here to find out more!
He joined the Pistons as a scout in 1976 and discovered Joe Dumars and Dennis Rodman, key players on Detroit’s 1989 and 1990 NBA championship teams coached by Chuck Daly – who took the job after Robinson declined former general manager Jack McCloskey’s offer.

“Will Robinson was truly a legend and will be missed dearly,” Dumars said. “He was a huge inspiration for me and so many others. He was simply the best.”” Via The Detroit Free Press 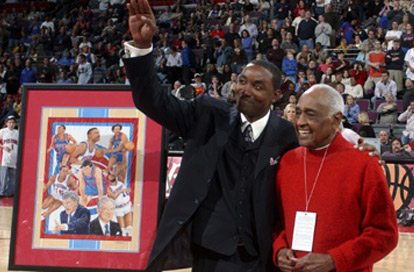 The Pistons lose a Legend

He will be missed.