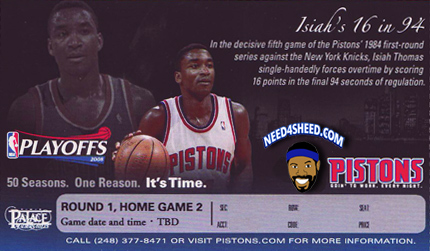 The Pistons will try to even it up tonight at the Palace to take the series 1-1 to Philly. None of us could have guessed (not even Sixers fans) that Detroit would fall in the first game. Plenty of news worth quotes came out after the loss, but this one popped for me.

“I hope that this doesn’t happen, but if we were down 0-2, I still feel like we’d win the series,” Billups said. “But I don’t want to get there and have to prove you all of that.” Via The Detroit Free Press

I don’t mind what Chauncey said, but he always seem to come across arrogant. I love the guy, but to say the things he’s said in recent years you have to back it up and right now Chauncey hasn’t done that. You could even say that Billups tries a little too hard to be Mr. Big Shot on many occasions when all he needs to be his Chauncey. I would love to have the confidence in Chauncey like I have in the past, but until he proves himself this year in the playoffs I can’t. It’s just how I feel, and trust me I wish I didn’t.

I’m not putting this Chauncey either, but I do find it funny that the only guy that took the blame for Detroit’s loss on Sunday was Sheed, who we all know had a monster game.

I’m expecting to see The Pistons step on some necks tonight like we know they can. And if they don’t….well I don’t quite get worried, just really pissed off.

Tip off is at 7:30 PM and will be Nationally broadcast on NBATV and locally on myTV20 Detroit. If you can’t catch it on TV you can always tune in to 1130 AM WDFN The Fan or stream it live through your computer at NBA.com.

As always I leave it to you in the comments.