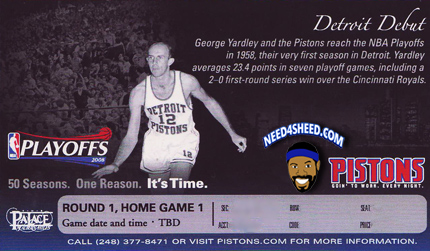 50 Season, One Reason and it kicks off today. Detroit will face The Philadelphia Seventy Sixers in the first round of the 2008 NBA playoffs in their quest for another NBA Championship. Tip off is at 6:00 PM and will be Nationally broadcast on TNT and locally on myTV20 Detroit. If you can’t catch it on TV you can always tune in to 1130 AM WDFN The Fan or stream it live through your computer at NBA.com.

As a special bonus Brian Ward of Depressed Fan answered a few of my questions before the series tipped off to give Pistons fan a true sense of the Philly perspective of the series.

I suggest you take an in depth look at Depressed Fan, Brian’s player by player matchups are top notch. Before I get to the questions, let me quote Brian from his Sheed – Reggie Evans matchup, “Let’s just get this out of the way right now, Wallace completely outclasses Reggie. In fact, he may be the most talented player on the Pistons’ roster, and that’s saying quite a bit.”

Need4Sheed: What needs to go right for The Sixers to upset Detroit?

Depressed Fan: Wow, this is a pretty long list. How about bullet points?

Need4Sheed: Tell Pistons fans who we should watch out for.

Depressed Fan: Hands down, this is Thad Young. He’s played minutes against Detroit this year, but he hasn’t really contributed much (20 minutes/game, 4 points, 3 boards). He’s a much, much better player than that. A game-changer on both ends of the floor and I’ll be shocked if he doesn’t leave a huge imprint on this series. Definitely keep an eye out for his lefty baby hook in the lane and the advanced footwork to get it off.

Need4Sheed: Detroit has plenty of weapons, who is the one player the Sixers need to stop to be successful?

Depressed Fan: I’m going to say Rip Hamilton. Not necessarily because his scoring needs to be shut down, but because the Sixers need to create a size advantage for themselves with lineup changes so Rip’s defense will be exploited and Flip will have to limit his minutes. Meaning, Iguodala needs to spend some time at the 2 with Thad Young at the 3. This means Rip has to guard Andre Miller, Andre Iguodala or Thad Young. Any one of those three can go to work on him in the low post. Put simply, every minute Willie Green is on the floor is a minute where Rip has a huge advantage on the offensive side of the ball and doesn’t have to expend much energy on defense.

Need4Sheed: We know Philly has taken 2 games from Detroit this season, but do you honestly think The Sixers can take down The Pistons? If so, what % chance do they have?

Depressed Fan: You had to know the answer to this question before you even asked. Yes, the Sixers have a chance. Granted, the second win didn’t mean much (not many minutes for the Pistons starters), but the win at the Palace was an eye opener because the Sixers beat the Pistons at their own game. It was a half-court, defensive battle. I’m going to say 30% chance the Sixers win the series, but they’d probably have to get it done in 6.

You can check out my answers to Brian’s questions on the Sixers-Pistons series over at Depressed Fan.

Here’s to the start of a deep, deep playoff run for Detroit. Please leave your comments, thoughts and anything notable from the broadcast, on both TNT and myTV20. Here’s to Piston red, white and blue.