Tuesday night The Detroit Pistons honored their All-Time Team in a ceremony before the Pistons-Knicks game at The Palace. 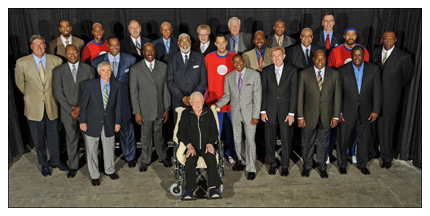 As someone who had been waiting for quite some time for this night to fall on the schedule, let me say that the night exceeded my expectations 110%.

I franticly made my way to The Palace at 6:45, so not to miss a thing. As I walked in the building I was treated with a replica 1989-90 Championship hat, the same one I have tucked away in a zip locked bag at home. I smiled. As I got closer to getting to my seats I passed The Palace locker room store, when I looked into the window I saw something that made me stop in my tracks. I walk in and immediately picked up the original Detroit Bad Boys black t-shirt, skull and all. I wore my original one to shreds and had to throw it away about 10 years ago. To my recollection they haven’t sold the shirt in the building since the actual days of “The Bad Boys.” My smile grew wider.

I got to my seat and waited for the festivities to start, camera in hand. As I watched them set up the chairs I knew that it was just a matter of time, and then out came the new Hall of Famer, Bill Davidson. They positioned Mr. D so he faced every player that walked out of the mini lighted tunnel. When George Blaha kicked things off he started by acknowledging Mr. Davidson’s accomplishments and announced his recent induction into the Hall of Fame. Let me just say that The Palace crowd gave him a very long, very loud greeting and standing ovation that seemed to go on forever.

Here is a quick rendering of the video, until I can get it split up later today for easier viewing. So if you are on a slow connection you may want to wait until later to view it.
UPDATE: Here is the (high quality) Video broken up in 2 parts . 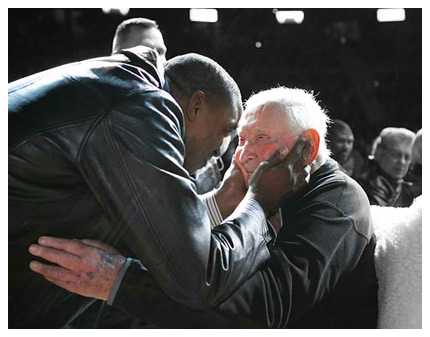 I will admit I shed quite a few tears, was genuinely choked up, and had one of the best times that I can remember Tuesday night. As I watched all the history, recalled the past and looked into the future all I felt was the honor and pride.