Knicks get their 8th road win at The Palace

Can’t say much about this game that you probably don’t already know. When Detroit has just 34 points at halftime, at The Palace against one of the worst teams in the league, you can see the signs coming for miles. A valiant effort from The Zoo Crew to make the score respectable and maybe even come away with the win was all you could ask for Tuesday night.

Rather than give you my standard post game recap I’ll recap a bit of what it was like to be at The Palace for the All Time Pistons Team ceremony. And what you may have missed from the broadcast. 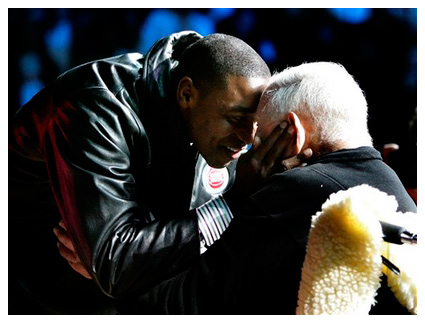 The video is coming, so until I have it ready for you I will tell you why Detroit lost this game to Isiah and The Knicks.

You are never supposed to break your routines right? Athletes are superstitious, so why did Rasheed opt to let Rodney Stuckey do the post introduction dance in the middle of the circle? Don’t get me wrong, Stuck did a fine job, but if Sheed is there, and he can stand upright, he should be doing what he does. Don’t switch things up now.

I will also take a little of the blame because I pretty much declared a victory before I left for the game. Despite the loss and Detroit’s play, I had one of the best times I have ever had at the Palace that wasn’t related to The Larry O’Brien.