Pistons Fall To The Raptors

The Pistons failed to clinch the Central Division with a loss Wednesday night in Toronto. Detroit didn’t exactly play up to expectations in their 89-82 loss to the Raps, and I’m actually putting that mildly.

This is not going to be your typical Need4Sheed recap for the simple fact the my Tivo Loves me! I’m sure many of you know that real life sometimes gets in the way of watching every game. That’s why the the invention of Tivo or the trusty DVR is better than two ply toilet paper.

See, I have a system of watching games when I can’t actually see them live, which is not very often. I DVR and Tivo the game. Overkill? Maybe, but the system usually works for me. Well last night I forgot to set the Tivo (can’t use season pass or it will record every NBA game) to record the game. I’m golden right, I have the DVR backup in place. Thanks to a certain cable company and DVR box, that always seems to give me problems, when I got home the game looked like it had recorded just fine. So when I sat down to watch it, it was locked up with a black screen. I was spared!

Now if it was the Suns game you can imagine how pissed I would be, but something or someone was looking out for me last night, unlike the Pistons. 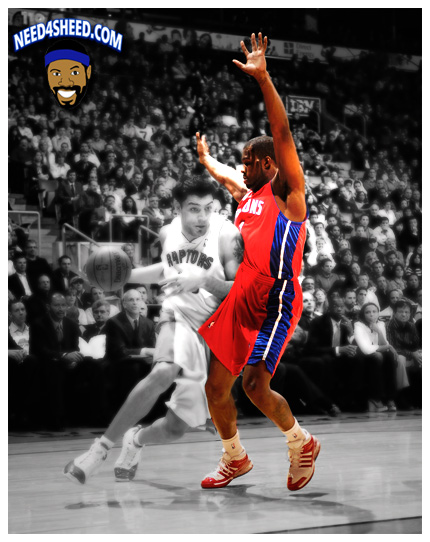 From your comments and the post game recap it was another lackluster, uninspired outing from our boys in red, white and blue. Rip wasn’t in the lineup, they were one win away from clinching the Central, they came off probably the best performance all season against the Suns and they had a players only “family meeting” before the game. So what was up with last night’s game?

These last few games of the season really don’t matter all that much and the Pistons are playing like it. I’m not worried right now, in fact I don’t really care. Let the youngsters get some burn, the starters get some rest and have everyone healthy come playoff time. If you want to worry you can, but until they have a game like this in the playoffs I’m keeping a level head.

If you want to relive the game Team Need4Sheed member GMac made a highlight reel for us to enjoy, though I think Toronto fans would appreciate it more.

I’m waiting for tonights game against Miami for a smile (I hope).